Today we have an extra special treat — Kevin Kölsch and Dennis Widmyer, the writing/directing duo behind 2014’s excellent horror film Starry Eyes.  Centered on Alex Essoe’s portrayal of Sarah Walker, an aspiring actress willing to do whatever it takes to get the role of a lifetime, Starry Eyes is a love letter to the genre (sealed with a big, sloppy kiss of body horror).

After building up strong word-of-mouth and garnering accolades from its theatrical and video on demand releases, tomorrow marks the release of the DVD and Blu-Ray editions, replete with deleted scenes and bonus features.  In advance of the big day, Kevin and Dennis agreed to talk to us about the creative and collaborative process behind their film. 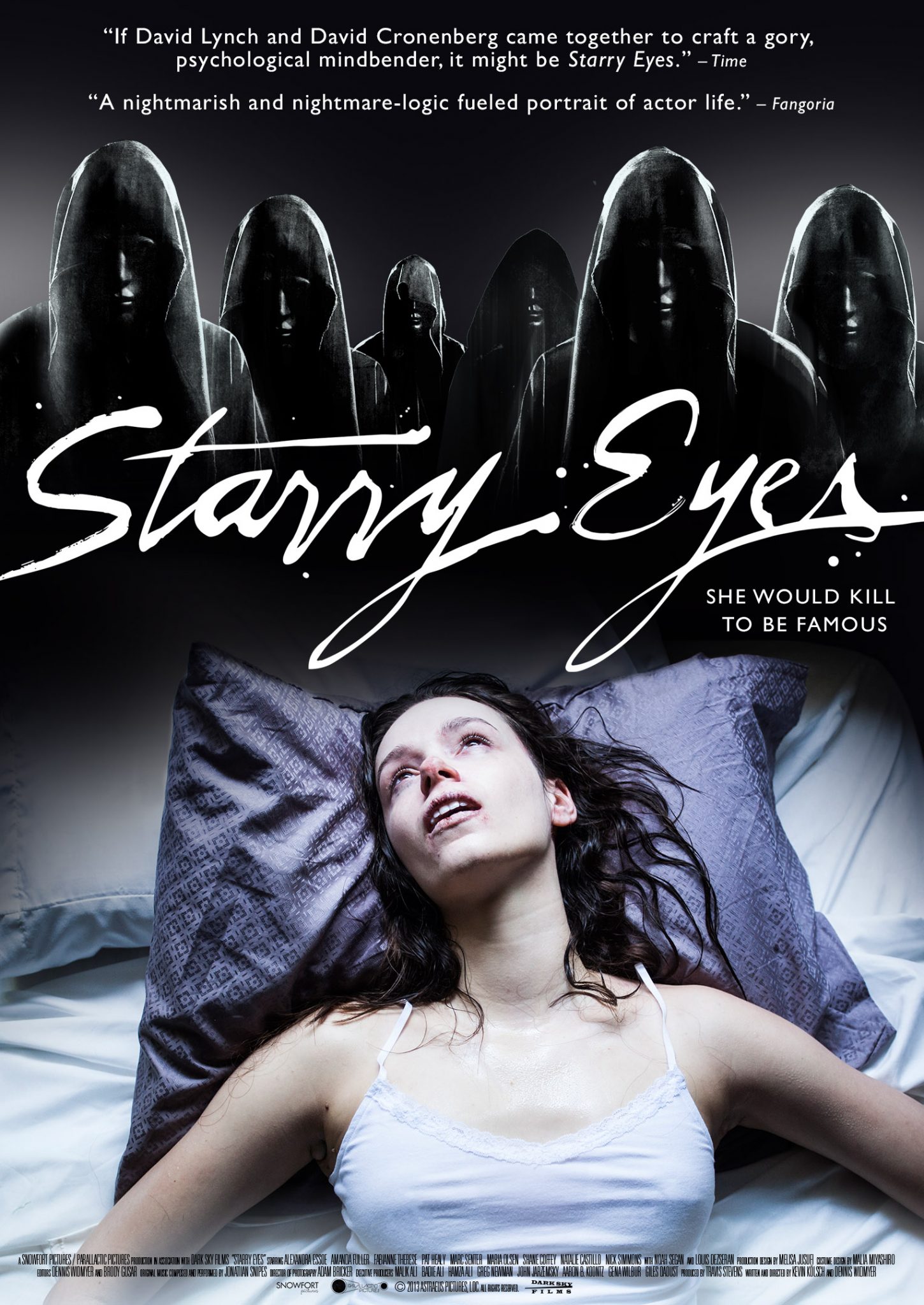 Hellnotes:  Starry Eyes has been getting lots of good buzz and appeared on lots of year’s end awards lists. Without being falsely modest, did you expect this kind of reception back when you launched your Kickstarter?

Kevin Kölsch and Dennis Widmyer:  Not at all. We weren’t even sure the film would be seen by anyone other than our friends and family and whatnot. However, the film is very ambitious and we did aim to make something that appeared bigger than its budget, so the reception the film has been receiving is very rewarding. It means all the hard work we put in has paid off.

HL:  In addition to being co-directors, you co-wrote the script. In practice, how did this work? Did you brainstorm together and split up scenes? Did one of you write while looking over the other’s shoulder?

KK/DW:  We brainstormed and outlined together then we split up the actual writing. We’d trade off the pages and each would do a pass on the others pages. After that, we read through the script together, acting the scenes out and making changes as we went based on how it read.

HL:  Paul Schrader has called screenplays “invitations to others to collaborate on a work of art.” Although you two wrote the script and directed, there were still producers, actors, crew, etc. that formed, and likely informed, the final movie. In what ways did the movie change as others contributed?

KK/DW:  The movie just kept getting better. It kept exceeding the expectations we had for it. All because of the insights and talents of our cast and crew. We never imagined how horrifying the effects would be at our budget level, but Hugo Villasenor is a make up wizard and when Alex [Esso, as main character Sarah Walker] came out of her trailer on effects days, we could barely even look at her. And she brought so much to the film. She is in every scene of this movie and basically has to use every tool in her actor toolkit. It was a demanding role. We knew this going in. And we were worried about finding someone who could pull it off. Then we found someone that not only did that, but took the character to a whole new level. Gave the character life. Became Sarah Walker. And the rest of the cast was amazing as well. We were lucky to have so many talented people in this. And for that, we owe our Producer, Travis Stevens. For believing in us and taking on this project and raising it above the small kickstarter film it began as.

And we just had the best crew. From Adam Bricker’s cinematography to Jonathan Snipe’s score, so many talent people helped this movie rise above the budget. Sure, we said earlier that our intention was to do that, but without this cast and crew, we never would have been able to.

HL:  While you’ve been open about the influence of what might be called the “psychotic woman genre” – including films like Revulsion or Possession – but are there any influences in Starry Eyes that audiences might be surprised to find out about? Perhaps ones from outside the horror genre?

KK/DW:  This may not be surprising, but a non-horror influence was Powell and Pressburger’s The Red Shoes. We also wanted to tell a sort of horror Boogie Nights. And Alex had said that her performance was greatly influenced by Gena Rowlands in A Woman Under the Influence.

HL:  From the stark title cards to the 80s-esque synth-closing theme, Starry Eyes contains some formal homages to the genre’s past. Within the world of the film, however, Astraeus Pictures itself is an anachronism – characters reference how it had faded away but was making a comeback. Do you see that being true of horror? Did that element of the narrative inform the structure or vice versa?

KK/DW:  There were earlier versions of the script that were more meta than the finished movie ended up being. Where we wanted to give the sense that the movie she was auditioning for was the movie you were watching. So we imagined that in our current times, where 80s homages are in, a company know for their films of the past could suddenly have a comeback. So we wanted the film to be a mix of the gritty reality of Sarah’s day to day and the 80s homage of the movie she will be making with Astraeus.

HL:  The lead actress, Alex Essoe, is rightly recognized for her incredible performance as Sarah Walker. However, the supporting cast is intriguing, particularly the contrast between the overly mannered performance of the casting agents or producer and the easy naturalism of Sarah’s friends and co-workers. What was your goal in introducing this schism between Sarah’s worlds?

KK/DW:  That ties in with what we said above. The idea was to make her friends and co-workers part of her realistic, everyday world, while making Astraeus feel more “horror movie.”

HL:  Some of the less immediately likable supporting characters have key moments late in the film that develop empathy and put their earlier actions within context. Sarah’s boss Carl’s (Pat Healy) speech at Big Taters and her friend Erin’s (Fabianne Therese) brief flash of seemingly genuine concern for Sarah, in particular, help to change the audience’s perception of these characters. How important was it for you to try to humanize these other characters, particularly as Sarah underwent her own metamorphosis?

KK/DW:  The idea was to tell a subjective film. Everyone is the center of their own world. They feel justified in their actions. So we wanted the audience to get on board with Sarah. And then seeing the world through her eyes, of course Erin appears to be the bitch and her boss is the jerk. But part way through the movie, you start to realize that Sarah’s actions are questionable and that she may not be the best person. And then everything shifts. Maybe these other people weren’t so bad. Maybe we were seeing them from a skewed point of view. Maybe Carl isn’t stepping on her dreams. Maybe he has dreams of his own and she’s stepping on his by being such an awful employee. And if we watched this movie from Erin’s point of view, how would Sarah look to us? Sure Erin says some not so nice things, but she is the frenemy. It’s all done out of competition. But ultimately she doesn’t do the things that Sarah is willing to do. And when she sees Sarah sick, she is concerned. It was important to show this humanity to illustrate just how far Sarah is willing to go. To show the contrast between the way she acts and everyone else does when things get serious.

HL:  Which scene was the most challenging to write? What about to shoot?

KK/DW:  The most challenging scene to write was probably Sarah and [her friend] Danny’s talk by the van. It’s a big turning point for Sarah and it also deals with many of the movie’s themes. We needed to really find the sweet spot. To address these issues, but not spoon feed the theme to the audience. Keep the characters talking and not the writers.

As far as the shoot goes, the whole thing was challenging. We were constantly racing against the clock. We were chased by security on Hollywood Blvd. Filming the rebirth, we had a rep from LA parks telling us that no nudity was allowed in any LA parks, it didn’t matter that it was for a movie and that we were up on a hill with no one around, he couldn’t allow it. Alex putting live worms in her mouth. Filming the pool scene, the underwater housing leaked and we destroyed a RED. We can’t think of a scene that wasn’t a challenge to shoot.

HL:  What advice do you have for aspiring filmmakers? Most authors we interview say “Just write,” but that advice might be more practical for self-contained stories or novels. What lessons did you wish you had known at the outset of tackling this movie?

KK/DW:  Well, in this day and age, the advice might be similar. We spent a long time trying to get projects made in the past. Nowadays, the technology has advanced to where filmmakers can make quality looking stuff for cheap. It’s a lot easier to show that you can get something done and out there. To hone your vision. To get better at your craft. People are shooting movies on their phone! Just stay productive. Get better at what you do. Have something to show for yourself. People will be more likely to take a chance on your film if you’ve proven that you can complete a project. People want to get on board a train they know is going to arrive at its destination. People say all the time, “look what they did with so little money, imagine what they could do with a budget.” That goes further than just hoping a producer will love you pitch and trust your confidence. Don’t wait around for someone to allow you to make a film. Just go out and do it.

HL:  The DVD and Blu-Ray are going to include a number of deleted scenes. What kind of things can viewers expect to find there? Is there anything in there that you really struggled with taking out?

KK/DW:  There were more deleted scenes than the ones on the disc. The ones we included were ones we thought could stand alone as a good scene. And it was tough removing all of them. They are all scenes we like, but ones that ultimately were removed for reasons like pacing and runtime or repeated beats. That’s why we chose to include them, they came out for the good of the whole, but on their own, we think people will really enjoy watching them.

Our thanks again to Kevin and Dennis!  For more information on Kevin, Dennis and Parallactic Pictures, visit their website parallacticpictures.com.  And don’t forget, Starry Eyes is being released on DVD and Blu-Ray tomorrow, February 3, 2015.  For more info on the film, visit starryeyesfilm.com.