He Who Walks in Shadows – Book Review 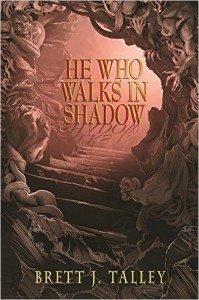 He Who Walks in Shadows
Brett Talley
JournalStone
May, 2015
Reviewed by Alex  Scully

H.P. Lovecraft is a name associated with both renown and renouncement. His opinions stir controversy almost as much as his stories stir the imagination. He created one of the most enduring pantheons in dark fiction, and in the decades since his death, authors have examined, experimented with, and expanded his world of ancient monsters and even more ancient terror. There are prequels, sequels, and spin-offs to the Cthulhu mythos in the form of games, novels, novellas, short stories, and film. It might seem like fans might be reaching their fill, but Brett Talley’s latest novel, He Who Walks in Shadows, proves that fresh, well-crafted Lovecraftian stories are as immortal as the Elder Gods themselves.

Talley’s advantage lies in his ability to recreate Lovecraft’s unique, all-too-real-surreal sense of tone and atmosphere without resorting to mere imitation. Lines such as “In the abyss shone black suns of ancient days,” and, “Carven by no hand of man, for humanity was but a whisper on cold winds” take us deep into Talley’s imagery and mood-laden worlds. The prologue alone is as darkly intoxicating as any Lovecraftian concoction.

Talley’s tale is full of macabre and sinister influences. Set in the early 1930s, the socio-political landscape is a backdrop for the thrum of evil rising in the dark nether regions. A series of journal entries outline the interwoven horror of clandestine ceremonies and spiraling insanity, all centered around an even deeper, more sinister secret–The Incendium Maleficarum, a “book which evil men have always coveted,” and which brings madness to the unprepared. Men have, and likely always will, kill for its power. Fiendish crimes in Paris, for example, are linked to horrors far worse than murder. By the end, reality and nightmare are indistinguishable.

In a turn-of-the-century time period with as much transition and turmoil as our own, Lovecraft created a singular vision of an ancient, unfathomable universe not always welcoming or even compatible with us mere humans. Building upon that framework, modern authors like Brett Talley have given the Elder Gods a compelling new voice for a generation facing down our own monsters. Recommended read.