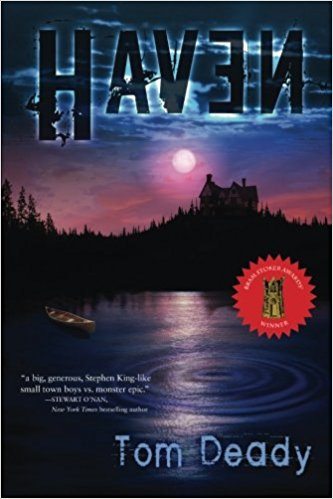 I came into Tom Deady’s Stoker award-winning debut novel, Haven, with just a touch of skepticism. It’s inevitable when you discover a coming-of-age story that you’ll think of King and McCammon. Their respective works, It, and Boys Life, pretty much set a standard that a lot of readers expect other authors to live up to. And a lot of authors try and fail, sometimes miserably, to edge into that territory, to write a story that can stand up next to those lofty masterpieces. It’s a mistake young, or new, authors often make, and it’s what breaks their story before it even gets going. Because you can’t walk in those legends’ esteemed shoes, and you shouldn’t want to. The books that take on the theme and succeed are the ones that don’t even try to approach that territory, preferring instead to forge their own paths and eschew what some authors, and readers, consider to be the template you should follow. Books like Children of the Dark by Jonathan Janz, and Rot & Ruin, by Jonathan Maberry—two Jonathans is purely coincidental—are exceptional examples of what can happen when talented authors choose to do their own thing, when they realize that there is no template and just write their own damn book. There wasn’t one when King wrote It, and that remains true today. So Deady was faced with the daunting challenge of creating a work that was just his, that would stand on its own legs and walk its own road, choosing not to linger in other shadows. And I’m here today to tell you that he succeeded in remarkable fashion.

The great difficulty for me in writing about a book like this is in figuring out where to start, and what to tell you about vs. what to let you discover for yourself. It’s such an epic tome in so many ways, and I want to tell you all the things, but this is not the forum for that because the review would end up being as long as the book it’s referring to. So, let me just start here: this book is amazing. With Haven, Tom Deady has created a breakout tour-de-force of a book, a debut masterwork like few I’ve seen before in the realm of dark genre fiction, and one that has won the hearts and minds of the collective horror community. Like authors such as Dan Simmons or Peter Straub, Deady is a reader’s writer and his tale is custom-made for the entertainment and enjoyment of the reading experience. He’s an avid student of the human condition and it shines through in his story, immersing his audience in something that feels as near to personal experience as it can get in terms of fictive escapism.

Because by far the most remarkable aspect of this book—like all great stories—is Tom Deady’s masterful handling of character. Right from the start, as the gates of the prison slam shut behind Paul Greymore, we learn volumes about him in a spare few scenes in which Father McCarthy, his sole supporter during his time in jail, meets up with him and drives him back to the small town of Haven. We learn that he was severely burned when he was a child, that the stigma of those burns has haunted him through childhood and into adulthood, and, most significantly, we learn that he’s spent seventeen years in prison, falsely convicted of a series of murders he didn’t commit. And that’s the way with all the important characters, good and bad, that we meet along the way. In a short space of time you come to know them intimately, and to care for them deeply or, conversely, hate them intensely. There is no grey area with Deady’s characters, and the evil ones are decidedly, deliciously, vicious and, in some cases, outright terrifying.

Another thing the author handles with exceptional skill is his pacing. The story starts out on the run and never slows down, gaining momentum like a boulder rolling downhill, but never losing control of the plot or the thread of the tale. Each chapter ends in a mini—sometimes major—cliffhanger that keeps you clinging to the storyline with breathless anticipation. He leaves you in such a way that you must know what’s next, and, unless you’re just braindead exhausted, you’re damn well going to keep reading to find out. And one of the things about the hooks he sets in you that make you stick around is his handling of viewpoint. As he progresses through the book, the viewpoint switches constantly, abruptly but naturally, keeping you hanging on to discover what kind of terror or madness he’s going to throw at you next. Don’t worry. He’s going to pummel you with it.

If you asked me to tell you what kind of book Haven is, I would say … well, what would I say? I’ve seen it described as a coming-of-age tale in the vein of Simmon’s Summer of Night, even called it that myself once or twice. And that’s sort of what it is, but there’s a lot more to it as Deady builds his narrative in intricate, multi-faceted layers. There is a coming-of-age story happening here as we follow the events and misadventures of Denny and Billy’s daily life as high school kids in a small town, replete with amoral bullies and a summer crush. But that isn’t the only story, nor are Denny and Billy the sole protagonists in this epic volume. You have Paul’s hazardous, often heartbreaking story as the stigma of his appearance, and the belief that he is guilty of the murders taking place, put him and his friends in increasingly more perilous situations. Then there’s Mossy’s story, one that really sits at the heart of the whole tale and brings some sense and believability, maybe even plausibility to the story. And all those stories intertwine with, and thread their way through, multiple other side stories that make for an epic, cohesive, and terrifying summer read about monsters of the “things that go bump in the night” variety, and even worse horrors of the human variety, the ones driven by lust and hatred to perpetrate horrific, unspeakable evils upon the characters we really care about and root for.

Overall, Tom Deady’s breakout horror novel is one of the most satisfying reads I’ve experienced this summer, one that’s going to be hard to top. Deady paints mesmerizing, Technicolor word pictures on the brain, stimulating the imagination and giving his readers the visuals they need to suspend their disbelief, all the while weaving a twisting, turning, tale of horror and redemption that is, at its heart, a searing portrayal of the human condition. One you should read as soon as you can. This monumental tale is one of the best debuts I’ve read in a decade or more and I can’t recommend it highly enough. If you like your fiction laced with heavy doses of horror and heart, you can’t go wrong with Haven.