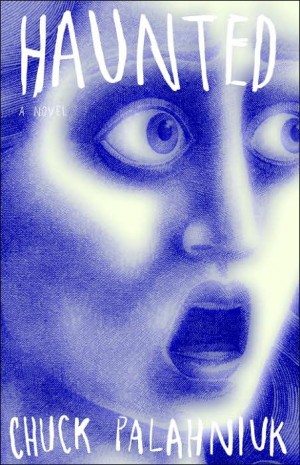 Haunted is unique throughout. With this edition, it starts with a cool glow in the dark cover, and continues with a hybrid mixture of poetry and short stories enclosed in a novel. The setting is a writers’ retreat tucked away in an old theater. It resembles the popular image of the ones you see listed in writing mags and on websites. Why, it’s even run by two eccentric people named Mr. Whittier and Mrs. Clark — the kind of folks that bluster on and on about shit nobody cares about while telling you that your writing sucks. Fun!

But the similarities end there. The other characters are named by their traits, so we have Comrade Snarky, The Missing Link, and Saint Gut-free, among others. Not Betty, Ted, and Joe. Each character gets a poem and tells their story. There is also narration of how things are going at the good ol’ retreat. Things go from kind of funky to real fucked-up, super-fast. There is ‘haunting’ but not by any ethereal beings or supernatural sheet swirlers. Nope! Like many of Chuck’s books, it is more about the things we haunt ourselves with.

Most of the emergencies and hardships are self-made by the characters, not some crazy invisible force. Palahniuk employs humor, terror, and gross-outs to get his point across, which is that everyone is always pointing at what external disaster is going to take humanity down. Terrorists will blow us away, some kind of religious cleansing will happen, a super virus will kill us — but Haunted shows that we’re doing just fine at ruining our own lives. Is Mr. Whittier a bad guy? Hard to say — he’s learned a lot about us from his “experiments,” but when he tries to break the cycle that always happens, he gets unexpected results.

This book is a detail lover’s dream with elaborate descriptions of each character and setting. However, that also may be its biggest weakness. There are times when the going gets thick, but readers that press on will be rewarded for their tenacity. If you want a book you can read multiple times to gain better appreciation of it, get this bad boy.