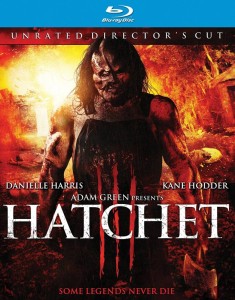 I liked the first Hatchet movie. It was a fun, silly, throwback to 80s slasher flicks full of gore and nudity and inappropriate humor. And then they had to make a sequel that was pretty much a needless retread that had none of the first film’s nostalgia factor or originality. All it had was just gore, no nudity (boo), and a bunch of characters that suffered from new-horror-movie-itus. Oh, you don’t know what that is? That’s when all the characters in a fright flick are unlikable douchebags that you could care less if they lived or died. For a perfect example of this, see the movie VHS. Anyway, Hatchet 2 did have two things going for it. One was the always delightful and cute as a button scream queen Danielle Harris, and the other was the not cute or delightful, but always badass Kane Hodder as the undying murder machine, Jason…oops, I mean Victor Crowley. But they alone were not enough to save Hatchet 2 from being just a meh movie. Well both Danielle and Kane are back for Hatchet 3. Is the third time a charm, or is this direct to disc sequel with a new director at the helm a pass like the previous one? Well put on your hip waders, we’re going down to the swamp.

This movie begins with a blood covered Marybeth (Danielle Harris’s lone survivor from the second movie) walking into a New Orleans police station, screaming “I killed him, I killed him!” Naturally she’s tossed into a cell and questioned. There she starts telling stories about how the local bogyman, Victor Crowley, murdered a bunch of people out at Honey Island Swamp. Cue the police and paramedics going out into the swamp, just in time for the ghostly Victor to return from the dead and start the bloody mayhem again.

That brings us to easily the best thing that can be said of any of the Hatchet films: the gore. It is always thick, red, gratuitous, and splatterlicious. Hatchet 3 is no exception. While I saw a few gore gags that might have been CGI, the vast majority of them were done practically with good old fashioned rubber, latex, and gallons and gallons of fake blood, and that love for a sadly fading craft was clearly evident here. If you’re a gorehound then this movie will have you howling.

Anyway, back to the story, such as it is. Genre vets Caroline (The Texas Chainsaw Massacre 2) Williams and Zach (Gremlins) Galligan join the cast as a nosey reporter and the local sheriff. Together they and Marybeth go down to the killer’s swamp to try to put an end to the voodoo curse that keeps having Victor come back from the dead. There is also Derek (Jason from the Friday the 13th remake) Mears as a comically gung-ho SWAT team commander and Sid (The Devil’s Rejects) Haig in a cameo. Pretty much all of this is just an excuse for some more over the top kills, and in that regard Hatchet 3 delivers. It also has some funny bits, sadly a lack of nudity (again, boo), and at least not everyone in this movie is a total tool, so that’s something. For that one reason alone, Hatchet 3 is a better movie than the second one. Yay.

On to the new Blu-ray from Dark Sky Films that comes with some pretty good extras. There are two commentary tracks here. One is with the crew and has writer/producer Adam Green, director BJ McDonnell, cinematographer Will Barratt, and make-up artist Robert Pendergraft. The other commentary is called the “cast commentary” but the only cast member of the cast on it is Kane Hodder, with Adam Green and director BJ also on it. There are three featurettes: “Hatchet III: Behind the Scenes”, “Raising Kane”, and “Swamp Fun.” A trailer and teaser bring these extras to a close.

Hatchet 3 doesn’t do anything new, but then it is a part three, so that’s to be expected. What is good news is that it is an enjoyable watch for the most part, if just for the creative splatter and the stunt casting of several all-stars from the horror world. Both Danielle Harris and Kane Hodder once again do good work here, and the splatter has never been better. So if you like goopy gore and don’t want to worry about too much story getting in the way, Hatchet 3 is the movie for you.