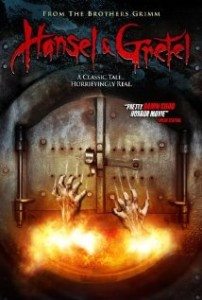 The Grimm Brothers were responsible for some of the most twisted and dark fairy tales in all of folklore. Their ideas were original and creepy and made full us of witches, monsters, and evil. Somehow, throughout the years, many of their stories were turned around and became not the terrifying bed time stories they had originally imagined, but nice, safe tales for the whole family to enjoy.

The brother’s Snow White was written as a horror tale with a dark and evil witch but became the sweet Disney film we all know today, as did their Cinderella, The Frog Prince, Rapunzel, and Rumplestiltskin.  All of these stories have been robbed of their true macabre nature and are now sweet children’s tales.

My personal favorite of the Grimm Brother’s tales was always Hansel & Gretel. I loved the simple yet scary story of two lost children coming across a witch who lives deep in the woods and eats children. Fortunately, that story is one that is hard to “sweeten” and has stayed a scary and dark tale throughout time.

Unfortunately, filmmakers have never really known what to do with it. There have only been a few movies over the past decades, most of them low budget throwaways, and the best rendering was back in the 80’s with a decent episode of Showtime’s great series Shelley Duvall’s Fairy Tale Theater with Joan Collins as the witch.

Earlier this year we were treated to the abysmal and misguided Hansel and Gretel: Witch Hunters which took the story and turned it into a ridiculous action film that fell flat and is one of the worst films of 2013.

Now we have a new low budget version set in modern days called simply Hansel & Gretel. It was directed by Anthony C. Ferrante, the man who gave us the SYFY network suck fest Sharknado. To be fair, I had no idea going in to this film who he was.

Hansel & Gretel tells the story of the title siblings living in a small Northwestern town. Played by Brent Lydic and Stephanie Greco respectively, Hansel is a video game junkie and Gretel works in a restaurant called, you guessed it, The Gingerbread Man. The store is run by Lilith, played by the wonderful Dee Wallace. She is the sort of older woman that you would find living alone and running a small restaurant. She is a bit eccentric yet super sweet and endearing. She is also very proud of her food, particularly the meat pies, and is smitten with Gretel who she treats like one of her own.

Lilith is also a witch. A very nasty witch who collects young people, teenagers mostly, keeps them prisoner in her house that is deep in the woods, and cooks them in her oven hence making those meat pies she is so proud of.

After falling into her trap, Hansel becomes a prisoner in her basement where he meets three other teens who are soon to be on Lilith’s menu. Gretel finds her brother missing and begins her quest to find him.

The story is pretty solid and puts the old fairy tale into the modern setting nicely. I like what the filmmakers did with making the gingerbread house the go to restaurant for the townspeople. It was a nice touch.

The performances are okay and our two leads do a decent job. Greco is good at conveying fear with her face and comes alive in the terror scenes but her line deliveries are a bit flat. Lydic fares better as her brother but is reduced to spending most of the film yelling.

Dee Wallace is the performance to see here. As she did in Rob Zombie’s excellent Lords of Salem earlier this year, she has fun with her role as the witch. She is funny and endearing as her alter ego Lilith and spookily entertaining when she goes into full witch mode. It is a lot of fun watching Wallace in this film.

Alas, Dee Wallace is pretty much the only reason to see this movie. When she is not on screen the film tries hard to give us scenes of terror but falls short. We watch as the captured teens all try to escape and have to go through various tortures and bloody trials to find their way to freedom. There are a couple of moments where we get to see people prepared to cook in the oven and even see someone get surrounded by vegetables with an apple put in their mouth before the flames surround them.

We get to see scenes of the youth being seduced by the “candies” that will lead to their undoing later. Wallace says they will help headaches and stomach aches.

There are scenes of deadly traps and axe wielding minions of the witch chasing their prey.

None of these moments are handled with any excitement or style. The whole film is extremely pedestrian in its execution. I know what you’re saying. “This is what you get when you watch a film from the guy who brought us Sharknado” but, again, I didn’t know!

Fans looking for good horror will be disappointed, as will fans of movies that hold your interest. Even with the good subject and all of the horrors that are happening on screen, the film is simply flat lined by stilted writing and boring direction.

I do want to stress that Dee Wallace is great fun and is worth sitting through the movie. It is currently streaming on Netflix and Amazon so you would not have to spend any money. If you are able to see this for free then I recommend it for Wallace’s outstanding performance. Other than that, stay away from this one!