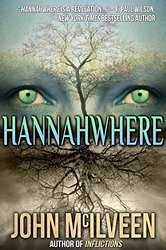 John M. McIlveen’s latest novel, Hannahwhere, is a complex, haunting tale that straddles that fine line between the real and the supernatural. Social worker Debbie Gillan finds herself drawn to a child found abandoned and tossed in the street. As she’s lured further and further into Hannah’s strange existence, she discovers that the thin veil of reality is slowly slipping away. How much of this new “reality” is real? Will the truths revealed bring salvation or destruction?

McIlveen keenly draws a razor’s edge of “real” throughout Hannahwhere. The reader is initially immersed in the dark reality of the Amiel twins. Neglect and the inevitable violence that ensues are the norm for these little girls. They spend their days trying to “stay clear” of their mother’s boyfriend during his “getting ugly” periods. McIlveen skillfully paints a brutal picture without resorting to cheap violence. As the novel progresses, however, you feel the ground slipping away under your feet. The “real” becomes slightly “unreal” until you find yourself questioning everything. McIlveen has found that elusive balance that makes Gothic dark fiction so alluring.

The paranormal elements in Hannahwhere are blended wonderfully into a story of pain, abuse, and, in the end, hope. It’s easy to let the supernatural overtake a narrative and spin so far out that the story loses cohesion. McIlveen maintains a tight control over the plot, giving us a multi-layered, thematic tale. There are challenging issues here. Without giving away the ending, McIlveen explores the themes of revenge, family, and exploitation with complexity and depth. John M. McIlveen’s Hannahwhere is captivating and compelling. Highly recommended.