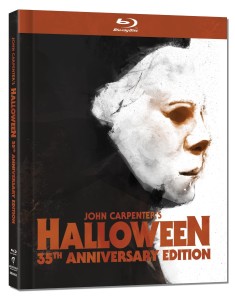 This is the newest edition of Halloween, a classic of the horror genre if there ever was one. As such, I’m not going to give you my usual nickel tour of the plot. Come on, it’s Halloween. If you have yet to see it, then for god’s sake, stop reading this review and do that. Now. Yes it is that mandatory for horror fans to see. So go ahead and watch it, I will wait.

OK, welcome back, or yay for you for already having seen this film and knowing how awesome this flick is. So yeah, this is yet another edition of Halloween, and chances are you already have this movie in your horror movie library. If you only have it on DVD, then hell yes, get this Blu-ray. The HD transfer of this film is simply amazing. It looks stunning. But if you already purchased the previous Blu-ray of this movie, do you need this one too? Hmm, that is the question.

There are only two reasons to get this new Blu-ray from Anchor Bay. The first is the brand new audio commentary with Director John Carpenter and actress Jamie Lee Curtis. This is the first time they did a commentary for this movie together. Yes, the last edition had both of them on the same commentary track, along with producer Deborah Hill, but all three people were doing their own commentary and someone later edited it all together. The second reason is a new hour long feature about Jamie Lee Curtis’s first horror convention appearance. Yeah sure, it comes in a cool digibook format, has a 10 minute featurette on the locations used in the film, and a 10 minute scene that was used to pad out the movie when it was aired for television, but while all that is fine, none of it is exactly mind blowing. And here is the part where I get angry: the commentary track from the previous Blu-ray edition that I mentioned before is nowhere to be seen on this disc, as is the hour and a half long documentary called, “Halloween: A Cut Above The Rest.” Why? Both that disc and this one were put out by the same company, so why leave any of the special features behind when bringing out a new edition? I hate, hate, hate when that happens. Oh a trailer, TV and radio spots can also be found here. Yay.

This Blu-ray really should be called the Jamie Lee Curtis edition, as she is the real star of the show here and the only reason to get this. If you already have Halloween on Blu-ray, unless you are either an obsessive Halloween collector or just a big fan of Jamie Lee Curtis, there is no need to get this new set. If you don’t already have this on Blu-ray, then by all means do. This film is a horror classic and it looks absolutely great in HD, but the sad fact is that the previous edition just offered you more bang for the buck. So consider this a conditional recommendation at best.