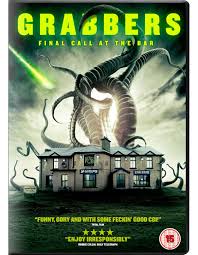 OK, so there’s this Irish island and one night a big, glowing meteor crashes into the sea next to it. Before you can say “uh-oh”, tentacle monsters right out of H.P. Lovecraft’s nightmares start attacking and eating everyone on the isolated island. Oh and the best bit, the only defense against the critters is to get rip roaring drunk. Which is fine with them because you know, they’re Irish! What, don’t look at me like that. I didn’t make this movie. Some honest to god Irish people did, so they’re allowed to play with the stereotypes. However they won’t get a pass from me if this sci-fi/horror/comedy doesn’t deliver the goods. So, does it? Well grab a pint and you’re umbrella, as it rains a lot in this movie, and let’s get to it.

In a lot of ways, Grabbers feels a lot like Tremors, and for me, that’s a very good thing. I like monster movies and there just aren’t enough of them being made these days. OK, check that, not enough good ones being made these days. Yes I’m looking at you, Syfy channel. Thankfully, Grabbers is one of the good ones. It has memorable, tentacle-waving beasties, and as a Lovecraft fanboy, that always makes me smile. The tiny town where the monster mash takes place is full of colorful oddballs with another guy, guy, girl trinity as the leads. There are scenes of suspense and tension juxtaposed with out and out comedy and silliness, and again; monsters galore. Hmm, you getting the Tremors vibe yet? You should. So yeah, this movie is tad bit derivative, but it is still a whole lot of fun.

In this film you have a drunk male cop, a pretty and by the book lady copy new to the island community, and a bookish, scientific fellow to deliver all the technical exposition. All three actors play their parts well, but I’ve always liked Russell Tovey a lot from his work on the UK version of the TV show, Being Human, so I was pleased to see him here. The supporting cast also bring their A games, especially Lalor Roddy as the perennial drunk Paddy. Hey, stop looking at me like that, I told you. I didn’t write this! Unlike many horror movies made today, these seem like real people, or at least, not completely reprehensible douchebags that you just want to see ripped apart.

The plot, setup, and pacing are right out of a 50s alien invasion movie, and that’s fine with me. The monsters are all CGI, but for the most part they are pulled off well and they do look suitably alien and nasty. The comedy is far more hit than miss, which I was thankful for, since many “horror/comedies” forget to bring the actual comedy. As for the horror bits, well this movie is no Exorcist, and what scares there are usually only exist to set up punch lines for the funny. But then this is a movie that has as its big selling point the idea that you have to get drunk in order to stay alive.

As for that celebration for all things alcohol, it’s not just done here as a “ha, ha, the Irish are all drunks, am I right?” kind of thing. These squiddy ET invaders are vampires who drink the blood of their victims, so there actually is a good reason for raising the alcohol content of your blood. Lest anyone forgets, booze is a poison, albeit a yummy, yummy one. Mmmmmm. Sorry, where was I?

So the movie is a hit. Sadly the DVD from IFC Midnight is only so-so. There is a nearly 17 minute behind the scenes featurette and a trailer included here, but that’s it. Now I know most foreign movies imported to North America don’t have a lot of extras due to language barriers, but last time I checked, the Irish spoke English. I mean, they still do, don’t they? So really, why were there not more goodies on this disc?

While the DVD of Grabbers is rather barebones, I’m just happy to have easy access to this very cool monster movie at all. If you like goofy horror comedies with aliens and great characters, you’ll love this movie. I sure did. Consider it highly recommended and be sure to grab (heh) yourself a copy when it comes out today.