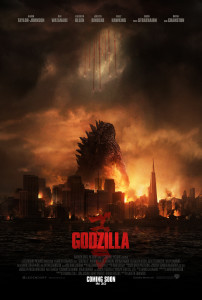 I will admit that when I first saw the trailer for Godzilla, I thought it looked pretty bad-ass. The ominous chanting of the choir; the red flares lighting up the night sky as the skydivers plummet into the unknown; black clouds of smoke and destruction entombing a city in peril; the tease of Godzilla himself, a gargantuan outline in the chaos, shattering eardrums with his signature roar.

Too bad Godzilla is just another case of great-trailer, bad-movie.

Think of the latest endeavour in the giant monster franchise as the lazy person’s Pacific Rim (and Godzilla himself can certainly attest to the lazy part. I mean, man, maybe cut back on the Cheetos and hit the gym some time, will you?). It’s complete with those familiar clichés from the daikaiju (really big monster) book that we all know and love – the person everyone thought was crazy was actually right, the excessive use of military force to kill the only thing that could actually save humanity (and then realizing oh, hey, maybe we shouldn’t blow up Godzilla), lots and lots of destruction (including the Golden Gate Bridge, as seen in Pacific Rim, among others) and finally, the seat-shaking, spleen-rupturing, ground-breaking crowning roar surpassing all other roars, exactly when expected and not a moment too soon.

The film stars Aaron Taylor-Johnson (Kick-Ass) as Ford Brody, a rough-and-tough military man with a sad past – his mother died in a supposed earthquake at the power plant where she worked and his father, Joe (who also worked at the plant but survived), has now become a conspiracy theorist, claiming that the quake was merely the government covering up something far more sinister. Father and son eventually discover that a creature has been living in the wreckage of the plant, feeding off the left-over radiation. When the monster suddenly wakes up and heads for San Francisco with lethal intent, the only hope for humanity lies with your pal and mine, Godzilla.

Taylor-Johnson’s performance as our human hero is as flat as a run-over pancake in the prairies. The character ends up in larger-than-life situations throughout the film and, you know, if you found yourself in a tram approaching the jaws of a monster, you might be a little…terrified, maybe? Or if you returned home after being on military duty for a while, would you not be ecstatic to see your family? Taylor-Johnson wears one face throughout the entire film, no matter what the situation, so points for consistency, I guess. Hell, even Godzilla emotes more than he does. The saving grace falls with Bryan Cranston, who plays crazy dad Joe (or why-didn’t-we-listen-to-him-scientist-#1). His over-the-top performance fits nicely into the world presented here, but everyone loves Cranston, especially when he’s playing someone who’s a little off-kilter, so could he really do any wrong? Ken Watanabe also shows up, playing Dr. Ishiro Serizawa (or why-didn’t-we-listen-to-him-scientist-#2) and says GODZILLA just as you imagine it, which is fantastic.

Apparently there are women in the movie, too, although if you blink you’ll likely miss them. Elizabeth Olsen plays Taylor-Johnson’s wife, Elle, and spends most of her little screen time crying or panicking, ultimately wasting the abilities of one of the more talented actors in the film. Juliette Binoche plays Sandra (wife of Joe, mother of Ford) but show up late for the movie and you won’t even realize she’s in it. Rounding out the ladies, Sally Hawkins plays Vivienne, sidekick to Watanabe’s Dr. Serizawa. She’s often seen gasping during intense situations. You know, the real meaty stuff.

Amidst the mess that is the characters and story (and the fact that Brody doesn’t get squished), the special effects shine through like a diamond in the rough. Godzilla, albeit a little hefty, looks amazing and the other daikaiju don’t look half bad, either. But in this day and age where great special effects are considered commonplace, are millions of dollars’ worth of explosions and a chunky dinosaur enough to save a movie? The answer is subjective, but I say no. It’s easy to sit in a darkened theatre for two hours and get lost in the action while things you didn’t realize could explode do or watch while a giant monster uses an extremely phallic nuclear warhead to fertilize her eggs (seriously!), but in the end you’re likely to leave unsatisfied because the story lacks the emotion and the development to make you give a damn. And that is Godzilla‘s fatal flaw. Yes, I want to see crap blow up just as much as the next person, but I also want my heart-strings tugged at when Godzilla falls to the ground within an inch of his life and there’s the small possibility that he may not get up.

So if you like movies where no brain power is required to have a good time and story isn’t really your thing, then you’re likely to enjoy this. But at least do yourself a favour and wait until the Blu-Ray hits the $5 bin at Wal-Mart.