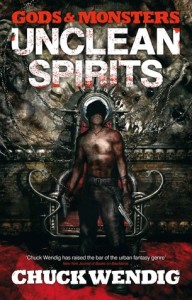 Gods and Monsters is a new shared-world line from Abaddon in which the gods and creatures of mythology are real and living among us, kicked off with Chuck Wendig’s novel Unclean Spirits. Abaddon has simultaneously released a related semi-sequel ,Drag Hunt by Pat Kelleher, and presumably more works set in this world will follow.

The basic concept is not new, having been used in Neil Gaiman’s American Gods and Rick Riordan’s Percy Jackson series, just to name two. However, Wendig’s book has its own personality and rules, and a distinct writing style. He treats the gods, particularly the ancient Greek ones, in a way that they perhaps should be: consistent with the myths, they are profoundly selfish and manipulative personifications of base human emotion and are at best indifferent to the welfare of mortals. They use them, burn them out, and leave the wreckage in their wake. As the story progresses, gods from different pantheons appear, and they each have a distinct flavor.

Cason is a former MMA fighter and bodyguard for a sex-crazed freak “E,” part of a deal he never wanted but made to save his family. He has a wife and son he doesn’t see. A man with nothing, no prospects, and no real ties. Cut loose when his boss is killed in a bomb attack, he goes out into an America twisted and warped by the inhumanly perverse power-hungry gods that live among us. The gods aren’t happy to be here either, thrown from their place of power by a usurping monotheistic deity who selfishly claims the universe for his own. These are petty, nasty creatures still filled with power, reduced to cult followings in the seams of society. The other human characters are mostly damaged units, scarred in one way or another by their contact with the divine. His wife Alison, memory manipulated, love for Cason replaced by rage. The god-hunter Frank, horribly mutilated in body and spirit and cast aside. Each discovers and resists toxic divine intervention to the best of his or her abilities, but it isn’t a fair fight.

The opening chapters are very choppy. It is rough going, and I am not sure I would have continued on if I were not reviewing. However, as the book progresses and the plot becomes clearer, so too does the writing. I don’t know the author’s work well enough to say whether this is an intentional literary device. If done on purpose, it is effective, reflecting Cason’s improving physical and mental health with increasingly clear prose. It is a risky choice though, as it may turn off readers in the early going. I suggest that it is worth sticking it out.

Once the narrative settles in, it reads well. The style emphasizes immediate sensory description and subjective impressions. The style is gonzo and rapid-fire, with bizarre imagery and flashes of violence and the grotesque, as Cason pushes ahead blindly into godly squabbles in an effort to get his life back. It has pulp noir sensibilities, permeated with vulgar, over-the-top weirdness. New twists and revelations develop at a brisk pace; they are not telegraphed but enough groundwork has been laid so the reader doesn’t feel cheated when the plot veers or new layers are discovered.

I do wonder if the prose could have benefited from a little more polish. As noted above, it is rough in places, and I thought that there were a couple of structural issues as well. For example, the character of Tunda could have used more development. The motivation for his involvement, and that of Cason’s brother Conny, could have been made clearer. The ending feels somewhat abrupt and unresolved. Another round of editing might have served to improve these issues, but it is also possible that a more polished text might have lost some of the chaotic visceral rawness that makes it enjoyable. It’s a buy-the-ticket-take-the-ride kind of book, and if you like the style, it is a fun ride, indeed.