Ghost in the Shell -Blu-ray Review 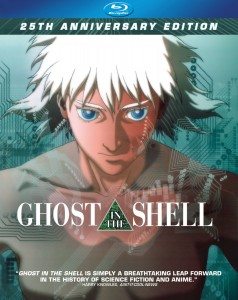 Before Japanese anime became a big things over here (and it is, even if you’ve never heard of it) this 1995 movie was one of the trailblazers of that unique art form.  While animated movies made in America were almost always made with kids in mind, these Japanese “cartoons” were firmly made for adults. No, that doesn’t mean they were “adult” in the North American sense (i.e. pornographic) but they were written and designed for those wanting mature stories that could utilize the freedom of vision that only comes through animation. After all, anything that a storyteller could imagine can’t always be realized in regular, live action movies, what with the limits of special effects and all, but if you can dream it up then you can draw it, so animation was a natural fit for genre films of all types.

That brings up to Ghost in the Shell, one of the most landmark cyberpunk films ever made, packed with over the top violence, not to mention heaps of nudity. It was unlike anything most US audiences had ever seen in an animated movie, with perhaps the exception of 1988’s Akira, which (surprise, surprise) also came from Japan. So yeah, this is one of those important movies people talk about, but is it good?

Set in the near future, Ghost in the Shell is a mind-bendy, sci-fi action story with plenty of high-minded ideas on the nature of humanity and what makes people “real.” Our protagonist is a female cyborg cop named Major Motoko Kusanagi that is more machine than flesh and blood, so the question of what constitutes humanity is always on her mind. That question is brought up again when the Major’s latest case has her tracking down a criminal called The Puppet Master, someone that can “hack” into the minds of people and make then do and believe whatever the master wants. Entire false lives can be created by this puppet master as easily as a programmer writes coded for a computer, without the victim ever knowing what was done to the.. So you have the spirit of a woman, or a ghost, in a body that is mostly machine, and you have created lives overwriting the reality of people. Yeah, it’s all pretty heavy stuff, but don’t worry, there’s plenty of kick-ass action and cool robots to make all the philosophical questions this movie brings up go down much easier.

All is not perfect in this movie. All those philosophical navel gazings can get to be a bit much. Sometimes the characters drone on and on, belaboring a point long after the viewer has got it. And then, just to make sure nothing was missed, the same subjects are brought up again and again. This is not to say that all this is necessary bad, but a tad tedious and repetitious the third or fourth time the same subject is belabored. Still, that’s a minor quibble at best, so let’s move on.

Now we come to the part of the review where we discuss the extras on the new Blu-ray from Anchor Bay. Okay, now that that’s done… Yes, sadly, there isn’t one damn special feature to be found on this disc anywhere, and for a 25th Anniversary Disc, that’s just disgraceful. True, this Blu-ray looks great, but then so did the previous DVD.

So, do I recommend this movie? Yes, yes I do. It is a sci-fi classic that had a huge effect on the genre it was made for. Do I recommend this Blu-ray? Well Ghost in the Shell is a must have for any anime, cyberpunk, or just plain old sci-fi fan. But if you already have this on disc, then you could possibly skip this release, as it brings nothing new to the table. So consider it a conditional high recommendation.