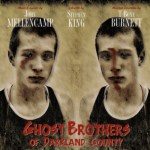 The Ghost Brothers of Darkland County saga began when Mellencamp told King about a cabin on his land in Indiana where two brothers had gotten in a fight over a girl; one brother accidentally killing the other, only to die along with the girl in a car crash a short time later. King came up with an outline for a play in a matter of days. And then off and on, back and forth, they began to develop it into a full-length musical.

The superb blues ‘n’ roots music of Ghost Brothers reflects the wide range of styles and influences needed for a work that jumps back and forth across decades. Rather than use the songs to propel the play’s narrative, as in a conventional musical, Mellencamp chose to make them a way to reveal the emotions and inner workings of the characters — like Neko Case’s exquisite, unapologetic delivery of “That’s Who I Am;” the intense passion of Kristofferson’s “How Many Days;” or Costello’s cunning “That’s Me,” which establishes the persona of “The Shape,” the Puck-like devil figure at the heart of Ghost Brothers who floats between the worlds of the living and the spirits. Numerous other highlights include the thunderous, dramatic ensemble piece “Tear This Cabin Down” and “Jukin,’” a grease-laden delta-rocker performed by Sheryl Crow. Mellencamp himself delivers the closing “Truth,” a sublime meditation on the moral issues underpinning the action.

Ghost Brothers of Darkland County will be available across a variety of formats. The (enhanced CD) Standard Edition features the complete soundtrack, dialog excerpts and digital libretto. The (2CD/1DVD) Deluxe Edition contains the complete soundtrack (with and without dialog), deluxe art work, handwritten lyrics, specially printed libretto and the “Making of Ghost Brothers” mini-documentary DVD featuring in-depth interviews with King, Mellencamp and Burnett along with other bonus material. Ghost Brothers of Darkland County digital editions for tablets, smartphones and e-readers will allow users to interact in unprecedented ways with the complete soundtrack + digital libretto, as well as exclusive video and graphic materials.

Set in the tiny town of Lake Belle Reve, Mississippi, the Ghost Brothers’ story centers on two sets of brothers: the ghosts of Jack and Andy, dead in an apparent murder/suicide, and their nephews, the living Frank and Drake, who seem to be headed toward the same downward spiral as their uncles. Joe, younger brother of Jack and Andy, father of Frank and Drake, has decided it’s time to reveal his own terrible secret at the site of the tragedy, before it’s too late.

Though some of the songs were written without knowing where they would fit in the script, most were the result of specific assignments. “Steve would call me up and go, ‘We need a song like this to fill this place,’” Mellencamp says. “To be able to go, ‘OK, now you’re a 10-year-old boy, what would he say? Now you’re a 19-year-old girl trying to attract the attention of a barroom of fellas’ … that was just fun to do.”

Once a working show had been assembled, producer Burnett — acclaimed for his work on such albums as Raising Sand by Robert Plant and Alison Krauss and the O Brother Where Art Thou? soundtrack — was brought in to help unify the flow and feel of the music on stage. Burnett would also prove crucial when it came time to cast and record the Ghost Brothers album.

He started with the voice of “The Shape” — “immediately, Elvis Costello came up,” says Burnett, “who could be better playing the devil?” Rosanne Cash struck the producer as a match for Monique, Joe’s troubled wife, as did Kris Kristofferson’s unmistakable scratchy baritone to play the patriarch himself.

As the story emerged, it became clear to the collaborators that Ghost Brothers had taken them into unfamiliar territory — and they liked it that way. “John can make rock & roll records and I can write books for the rest of our lives,” says King, “but that’s the safe way to do it, and that’s no way to live if you want to stay creative. We were willing to be educated, and at our age, that’s an accomplishment.”

The highly successful original production of Ghost Brothers of Darkland County, staged by Atlanta’s well-regarded Alliance Theatre, premiered in the spring of 2012. Additional productions of the musical will be mounted in the coming year