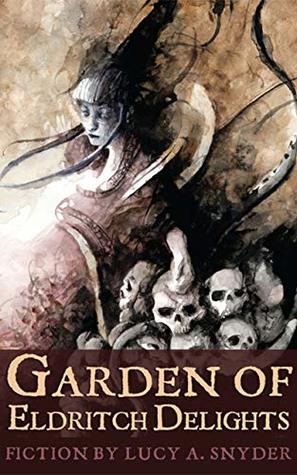 This is an amazing collection of speculative fiction! Well, wait an amazing collection of fantasy fiction. Perhaps an amazing science fiction? Have I mentioned the references to the ancient ones? Okay…Whew! Let’s calm down here. What I’m trying to say is that Garden of Eldritch Delights by Lucy A. Snyder and just released by Raw Dog Screaming Press is an amazing fiction collection that reaches into many genres and tropes that are interrelated. Pretty much if you’re looking for a wide array of reading experiences, you will be elated and then satisfied by the Garden of Eldritch Delights! Let’s dive in to this wonderfulness, and by that I mean pus-streaming sores while being attacked by deadly monsters. This garden is not for the faint of heart!

Do you have a major shithead of a boss? One who likes to make you beg for vacation or the chance to leave early from work for a legitimate reason? If so, then you’re going to really enjoy “Executive Function!” Bradley Pendleton certainly digs being the head honcho. He’s also a sexual predator, which is not cool at all. Luckily he meets Miss Alewhite, who shows Mr. Pendleton exactly where he stands in the world. Enjoy! Savor this creep’s dismay and gasp at what’s behind the façade of a major corporation. Power corrupts, does it not?

Now let’s flip that scenario around a bit. Let’s take a guy, who’s an overall decent person, but just kind of in the toilet at the moment. Said guy goes by the name Kai and has joined forces with a hardened criminal for the purpose of making some money. Details are kind of shady, but that’s life. Either you play to win or end up in some sorry ass shape. As Kai sits in the getaway car waiting for a deal to go down that what will take care of his problems for a little while, he sees someone who might need his help. So he offers it and is well rewarded for his good deed, but not without a sort of trial by fire. Because that’s what happens when you fight against those who worship “Santa Muerte!” This cool story was co-written with Daniel R. Robichaud.

One last peek into the garden, but be quick! Those horses run fast and these warriors don’t play around. In “The Warlady’s Daughter” we meet Elyria who was created by a common enough situation. A couple of folks got inebriated and had some fun. But Ria didn’t grow up as a daughter, she grew up under false premises. However, the lady warriors known as the Nemain return for their leader’s daughter so that she may have the opportunity to learn and join them. But what of the narrow minded villagers? Will Elyria become a warrior and a member of the Nemain? Or will she decide to remain at her uncle’s bakery and take whatever is forced upon her?

Lucy A. Snyder’s Garden of Eldritch Delights is a Five-Star read which will be displayed on the “Wall of Fame” where all my favorite books are! This is what you can expect as a reader of books published by Raw Dog Screaming Press! Great artwork by Daniele Serra with twelve delicious stories for your entertainment and positive messages for our souls. Once again, a great author writing dark fiction that is socially relevant and scary! Lucy A. Snyder is also the author of many other fine books such as Switchblade Goddess, Spellbent, and the short story collection Chimerick Machine!.