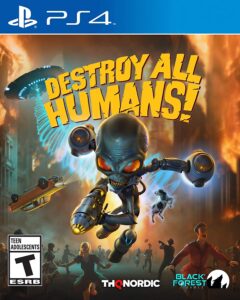 First, why is this here on Hellnotes? This is a horror site! Well, many a great horror story has begun with the idea of aliens. My favorite film of all time, John Carpenter’s The Thing, is about an ancient alien, and I’ll fight anyone that says that movie isn’t 100% horror. Then there’s the 1979 classic Alien, and, well, it’s right there in the title. Don’t even get me started on The Blob, especially the 80s remake, which is one of the best horror remakes of all time. Well, this game, a remake of a title first released in 2005, isn’t anything like those. No, it’s comedy first and foremost, but you do play as the rampaging little g(rey) man, giving out unwanted anal probes, exploding people’s heads to collect their brains, and just outright disintegrating anyone that really annoys you. Also, it’s just fun and I liked it, so here we are.

Second, if you played the fifteen-year-old original and you liked it, then you can stop reading after this paragraph. This game is one of the more faithful remakes (some minor jank and all) but polished up to an extra pretty, if extra cartoony, shine. It has also been expanded with some new missions and such content that felt like seamless additions. That’s a good thing, as I hate remakes that add new stuff, but you can always tell what’s new, even if you never played the first game. Seriously, this is how you do a video game remake, so if you enjoyed the earlier version of this game and have been looking to trip down memory lane, you should love this version. 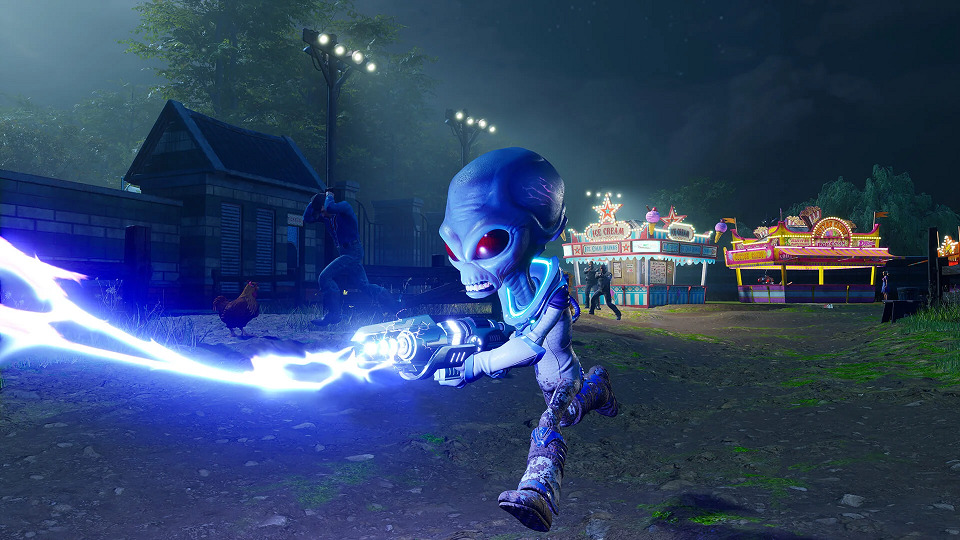 Now, if you are new to the world of Destroy All Humans! (you must always have that exclamation point with this title) then let me give you the nickel tour. You play as a lone alien invader, coming to 1950s America (of course) and looking to spearhead a large alien invasion. To do this you need to collect human brains, do bad things to cows, blast people to atoms, fight the government, and wreak havoc in a small town. Most of the game has you running around on foot, or zipping around with a jet pack, zapping people with various sci-fi guns and neat powers like mind reading and telekinesis. You must undertake classic alien missions like abducting people, assassinating high-level government guys, fight the men in black, and sabotage human defenses. To break up the monotony of that a bit, there are some light stealth elements where you use holograms to appear as an average Joe and sneak around when all-out violence isn’t the answer. But then, to indulge in those violent tendencies, there are also times when you get in your sweet, sweet flying saucer and rain down fiery death-ray vengeance on anyone and everything you want to. Fun.

Now the game play is pretty basic. The third person shooting mechanic is very forgiving; just point in the general vicinity of your human enemies, hold down the trigger, and you’ll be fine. The stealth is a bit too simplistic and probably my least part of the game. The UFO times are fun, blasting a whole bunch of stuff while relying on strategic shield use to deflect incoming attacks. The whole game can be completed in 15 to 20 hours, so things don’t outstay their welcome. However, each mission has a number of optional objectives, which does add some replayability.

Destroy All Humans! is a great remake, taking what was already good and making it better. It is a light, breezy, and quick experience with a lot of mayhem and a ton of humor. No, not all of the jokes land, but most of them do, and I always had a smile on my face while playing this. If you are looking for some throwback fun from a few console generations ago, brushed up for modern systems without losing a beat, this little game will do that for you. Consider it highly recommended.