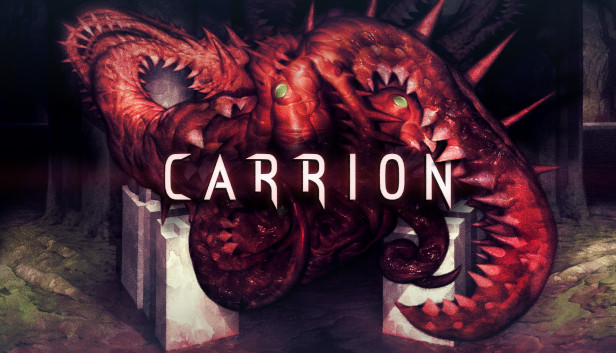 This new game from developer Phobia Game Studios and the always insane (in a good way) publisher Devolver Digital is out for the PC on Steam, Xbox One, and Nintendo’s Switch. And it’s the last platform that is really surprising, considering the idea behind this one. Here an amorphous horror made of slime, tentacles, teeth, and claws is stalking and eating all the people in a secret facility. The twist to that familiar tale is that you play the creature. Yes, you are the monster and everyone else is your prey, and that’s why this one is being sold as a reverse horror game. I like that idea, I like being able to play the monster, but how is the actual game? Well ,get all your tentacles together, sharpen your teeth, don’t forget to floss and eating, and let’s find out.

The story of Carrion is…well, not that complicated. In fact, there is a tangible lack of story. Simply put, it’s simple, but you know what? So are the “stories” of Pac Man, Spy Hunter, Donkey Kong, and other old-school games that Carrion seems to want to emulate. That doesn’t mean those classic games aren’t great, and the same holds true for this little gem. However, it must also be said that “little” is a good way to describe this game, as you can beat it in four to five hours. So if you’re looking for an in-depth, hundred-hour-long RPG experience, well this ain’t it. That said, what Carrion is, is a fun and fast game where you play a rampaging tentacle monster and that’s a whole lot of fun. 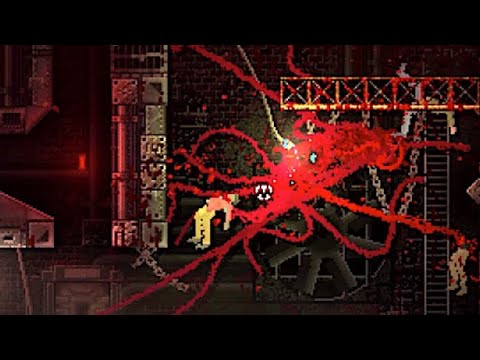 Carrion is a 2D side-scrolling game with retro (but gloriously gory) graphics. You start off as a smallish biomass of unknown origin and your goal is to escape the science facility you find yourself in. Oh, and to eat everyone you meet and grow. In fact, every time you much on some unfortunate human, you grow in size until you’re a proper Shoggoth-like (see H.P. Lovecraft’s At the Mountains of Madness) monstrosity in both appearance and size. In addition to just bulking up, you gain new powers and abilities as you go, like a good and goopy Metroidvania-like game, but the difficulty ramps up, too. As the tasty humans react to your presence, they start arming themselves with riot shields, machine guns, and the old monster-dreaded standby, the flamethrower. And just as you gain mass from eating people, you lose that precious mass as you take damage. In addition to improved hunting abilities, some of those new powers you get allow you to explore new areas, again, in the fine Metroidvania tradition. But playing as the monster does mean that this bloody and over-the-top violent game (both good things) is never scary or in any way horrific. You are the terrifying monster, after all, so what do you have to be afraid of? Well, other than flamethrowers. I hate those things. 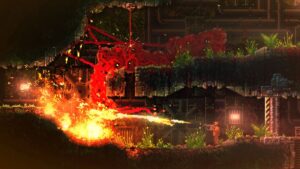 Carrion is a fast and breezy experience, but a fun one. The loose physics-based game play is enjoyable, and its fresh take on letting you play the monster makes this one stand out from the crowd. The story is nothing special, the game is short, and there’s not a whole lot of repeatability to be found. Still, it’s a pretty unique and engaging experience, so consider this one recommended.