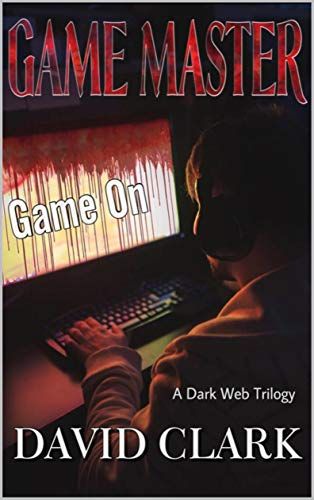 One of the many cool things about Horror is that it fits anywhere and can be applied to so many situations. Many people might think of horror as just slasher flicks or haunted houses, but it can also fit into the world of online gaming. If you don’t believe me, then maybe you should take a gander at David Clark’s Dark Web Trilogy Game Master. Today I’m reviewing the first novella in this series Game On and let me tell you, this is one scary read!

Robert has a serious passion for online gaming. If he has free time, that’s where it goes. His handle is Killazilla and he’s pretty damn good at his chosen game. However, Robert has a real life too. This lucky guy has a live-in girlfriend, is going to college and working part time. So he can’t use all his time for gaming unless he wants to lose a beautiful lady and shoot his future down the tubes. Robert’s nobody’s fool! Still, he’s pretty crafty at getting in at least a couple hours a day…

Life is pretty predictable until Robert meets Chris aka UDiedPlaying through one of the gamer chat rooms. Soon there’s a whole community he’s part of that plays as a team and wipes out any competition. But Chris is always the one who racks up amazing kill numbers and is damn near impossible to nab, much to Robert’s frustration. Having someone who wins ALL THE TIME and isn’t afraid to talk smack can really needle a guy. Then the impossible happens.

Chris throws a party at his house an invites all the team members to attend. Robert is nervous but he goes and has a pretty good time. Everything is cool and Chris owns the most amazing bachelor pad. So how do Robert and his teammates end up fighting for their lives with no possibility of rescue? What kind of sadistic creep would do that to people he called his friends just minutes previous? It appears that they all underestimated what Chris could do in his physically handicapped state. Not only has he tricked them but they are required to play his games for very high stakes. If you don’t win…you lose your real life!

I give David Clark’s Game Master: Game On novella 5 Stars! This is a unique approach to horror and it felt fresh, sharp, and frightening. I really dig the surprise ending and think Clark brings something new to the party. This is a series that reaches out to include the vast population of gamers, just as a lot of games reach out to horror fans and I like that. The fast, suspense-filled action will give you an adrenaline rush! This is number one in a trilogy that promises further adventures and excitement, so be sure to follow David Clark’s author page on Amazon for information on those upcoming releases! He’s also featured in multiple anthologies. You can also follow David at www.facebook.com/DavidClarkHorror. Make sure to tell him that the fine folks at Hellnotes sent ya!