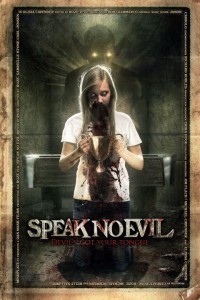 Daughter of Legendary Dee Wallace In Break Out Role

(Phoenix, Ariz.) The independent horror film, Speak No Evil starring Gabrielle Stone premiered in Tempe, Arizona on May 24, 2013. The movie, filmed entirely in Arizona, opened to a local audience at the Phoenix ComicCon. The Los Angeles premiere was May 30, 2013. The film moves on to Detroit for a screening on June 7, 2013.

Playing the lead role in Speak No Evil is break-out star Gabrielle Stone 23, the daughter of “Scream Queen” Dee Wallace (E.T, Cujo ,Lords of Salem) and actor Christopher Stone. The second-generation actor portrays a young mother whose daughter (played by newcomer Olivia Cavender) has gone missing under suspicious circumstances. In her search for the daughter and subsequently, all the children in a small town, the movie takes a turn into a suspenseful, drama-filled horror.

The innovative Director Roze chose Gabrielle Stone to fill this demanding role. “Roze is such an amazingly talented director and human being.” said young actress, “The way his creativity transcends to the screen is something I have never seen before. I had such an amazing time on this film working with him and the rest of the cast.”

Dee Wallace, who notably made her mark playing a mother in the Spielberg’s 1982 ET: The Extra Terrestrial said, “I am thrilled my daughter is having so much success doing what she loves. She has an amazing talent and a deep emotional life. But above everything, she is a loving and compassionate person who makes the world a better place.”

“I believe audiences will be blown away by Gabrielle’s performance.” said Speak No Evil Director, Roze. “She had a tough role to play because of the complexity of the character, Anna. It was her first time playing the role of a mother, but what made it interesting is that Anna wasn’t a very good mother. Gabrielle took some risks that really paid off.” continued Roze. ” I really enjoyed getting down to work with her, and drawing out even more than I hoped for.”

The Speak No Evil actress and Director will appear at select screenings, HorrorCons and ComicCons across the country from June 1 through October 31. For the complete premiere and screening schedule of Speak No Evil starring Gabrielle Stone contact [email protected].