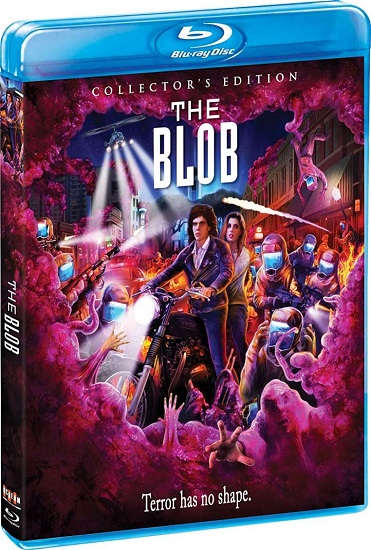 Press Release: The Blob is back in this horrific tale about a vile, malignant life-form that crashes to Earth in a cozy, rural American town called Arborville. Untroubled by conscience or intellect, the Blob does only one thing – and it does it well. It eats anything and everything that moves: men, women, and children. It wants to swallow the entire town of Arborville.

The original version of the Blob thrilled and terrified movie audiences back in the 1950s. Now the oozing, gooey killer is back. On October 29, 2019, SCREAM FACTORY™ is thrilled to present THE BLOB Collector’s Edition Blu-ray. Directed by Chuck Russell (The Scorpion King), the film stars Kevin Dillon (Entourage), Shawnee Smith (SAW movies), Donovan Leitch (Glory), Jeffrey DeMunn (Billions), and Candy Clark (American Graffiti), with Joe Seneca (A Time to Kill) as Dr. Meddows.

Preorder is available now at ShoutFactory.com.