From Classic to Contemporary

From Classic to Contemporary

When I was still teaching at Pepperdine University, one of my favorite courses was “Myth, Fantasy, and Science Fiction.” The class read contemporary novels and short fiction, many of them based on time-honored themes and motifs, and discussed ways in which modern writers re-worked and re-shaped the old to make it speak to the new. 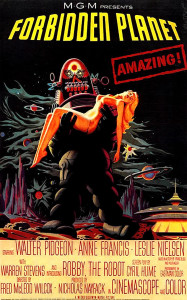 One of the more intriguing assignments, I discovered, incorporated film with the written word. During two class periods one semester, we watched the classic 1956 science fiction film, Forbidden Planet, then spent the next two periods talking about it: its genre-bending influence on films and stories of the 1960s and 1970s and beyond; its power as sheer storytelling; and its relevance to students of the 21st century…for whom Robby the Robot was arguably more familiar than any of the star-level actors involved. We finished on Friday with thoughts about differences we saw between two modes of narrative: writing and film. What could be established in a few seconds on a camera, for example, that might take sentences or even paragraphs to re-create on the page; and what had to be told through objective images in a film that might entail internalized thoughts in a story. On the whole, the students’ responses were intelligent and enjoyable.

Over the weekend, I assigned an additional reading, one that I had not included on the list of required books: William Shakespeare’s The Tempest.

During the first period the next week, the students were confused and upset and even a bit angry. All right, they conceded, the Shakespeare thing was a fantasy; it has magical creatures and, in fact, a magician. But why did they have to read something that old—and that difficult—for what was supposed to be a general-studies course. Only a handful of the students were English majors, and none of them had encountered The Tempest before, so even they were more or less up in arms.

Instead of trying to mitigate their confusion directly, I asked if they had noted any similarities between Forbidden Planet and The Tempest.

Being a good teacher and a strong believer in letting thoughts arise on their own timetable, I waited.

Then: “Well, isn’t Dr. Morbius sort of like Prospero, you know, alone, with only his daughter and a servant?”

“Yeah, and then people come, and the daughter falls in love, and….”

“And the Monster from the Id, that’s kind of like….”

That was all it took.

By the end of the period, they were deeply into the parallels, some pointing out how having read The Tempest had altered their perceptions of characters and events in Forbidden Planet, other commenting on how smoothly the film translated the play into a form at once recognizable (with a bit of a prod, perhaps) and entertaining.

I thought of that experience again this morning when I read a short story by Joe McKinney, “Resurrecting Mindy,” first published in Undead Tales (2011), edited by Armand Rosamilla, and now being incorporated into a forthcoming volume, Dead World Resurrection: The Collected Zombie Short Stories of Joe McKinney.

As I read the McKinney tale, something kept knocking at the back of my mind. It wasn’t that the tale was familiar, exactly, but there was something about it….

Michael R. Collings is a two-time finalist for the Horror Writers Association annual Bram Stoker Award, once for poetry and once for non-fiction. He has written over 120 books, including bestselling horror novels, mysteries, science fiction, non-fiction (with Stephen King as a specialty) and poetry.

A professor emeritus from Pepperdine University, he is a professional editor and reviewer as well, with multiple contributions at JournalStone.com, Hellnotes.com, and in the print journal DARK DISCOVERIES.