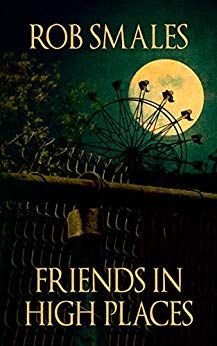 Tommy “Tagalong” Taglioni always wanted to be part of the gang. But Tommy was small and wheezy, and he didn’t have the cred of having been born and bred on the block like the other boys. In the hopes of getting rid of him, the boys make a deal with Tommy. And they are finally rid of him, but only temporarily.

Friends in High Places is told in the first person with a voice that is convincingly young, yet smart and observant. Our narrator is best friends with beefy, bully Ray and the petite, intellectual Jerry. The three boys could easily find themselves in Stand By Me or It: they are all-American, middle-class, suburban and like many boys in horror stories, they are stoked for the summer carnival. No good ever comes from the carnival and this story is no exception. The twist is that the danger does not come in the form of Carnies; it comes from the boys themselves.

And truly, the boys make one simple mistake, as most of us made simple mistakes in our childhoods. This mistake comes back to haunt them, pun intended. We all know that kids can be mean and their innate drive for social self-preservation is second to none. For those that are excluded, that desperation to belong can drive them to do extraordinary things. And that is what Friends in High Places is about.

This is an engaging coming-of-age ghost story. The kids are realistic and relatable. Smales does a great job of capturing the bone-headed mistakes of childhood that ripple out until the consequences are staggering.

Friends in High Places touches on common fears, such as the fear of heights, as well as more existential fears such as the fear of being alone, or of never being alone again. There is a wonderful scene describing a funeral through the eyes of a child that shows how bewildering mortality can be at any age. And there are moments of complete normalcy, such as the inclusion of popular television shows from back in the day, that highlight the fact that nothing will ever be normal again for these boys.

While there is a familiarity about the characters and the coming-of-age story, there is a uniqueness to the end of innocence in Friends in High Places and that kept me turning the pages. As always with Smales, the writing is strong and taut. The story has an eerie atmosphere that is perfect for this Halloween season. I highly recommend the book: it is a quick and creepy read! A very enjoyable story for horror fans and fans of the supernatural.