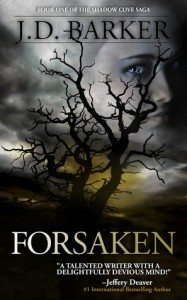 Inside a worn leather journal given to him by his wife, Thad McAlister found the root of his newest horror novel. A novel that came to him without pause, flowing from his mind to his pen almost faster than he could write. A gift of divine inspiration it would seem, but ever since Thad began, he cannot shake the visions of Her. Night after night, she haunts his dreams, the clicking of her fingernails crawling through the air like something from nightmare.

This book, he is certain, will stand as his greatest work, but with the words he has written, something has awakened. And it’s determined to come back.

Thad’s wife, Rachael, struggles to keep the evil from their daughter and unborn child, but she carries her own secrets. Secrets that may hold her responsible for the danger brought to her family. Without Thad, Rachael must fight against those who serve Her.

All the while, Thad encounters a beautiful and mysterious woman named Christina, who is inexplicably tied to Her and guides him toward a final task. A task he knew all along he must complete in Shadow Cove—a land occupied by strange creatures and whose ground is poisoned with dark magic.

As a frame story, this works quite nicely. Barker weaves sections of Thad’s novel into the text, and it serves as a historical grounding for the evil presence threatening the McAlister family. With direct references to the Salem Witch Trials, there is an authenticity here that lends the book credence. Some sections were a bit stronger than others—the Puritan-eque dialogue felt forced in some spots—but these grew stronger as the book went on, and soon I found myself looking forward to these sections. Desperate to know a little bit more about the girl imprisoned and accused of witchcraft. Desperate to know if the girl was Her as some prior incarnation.

Barker moves the plot along at a hastened clip, the desperation in Thad building to a crescendo by the novel’s conclusion. Pages turn quickly and chapters are finished in such a way that I stayed awake to finish “just one more.”

Thad serves as a flawed hero. It would have been easy to dismiss him early in the novel as too flawed for redemption due to a flashback that reveals some unsavory traits, but Barker plays his hand subtly and allows his character the humanity of making mistakes while still striving for good.

While I had a few quibbles,—the minions, particularly, seemed strange and not as frightening as I’d like them to be and some elements struck me as somewhat repetitive—I enjoyed this book and would recommend it to anyone with an interest in witchcraft.