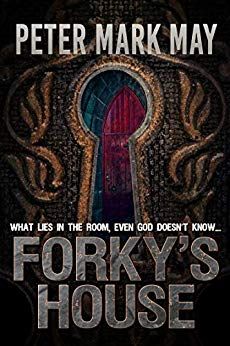 Don’t let the pleasant-sounding title fool you into thinking that Forky’s House by Peter Mark May is anything short of terrifying. This recent release from Macabre Ink is going to mop the floor with you, then ring you out and leave you to die! And no, that was not a typo. Forky’s House is not a college frat house, a dining establishment, or a place that people escape from alive. It is a centuries old building that has its own bank account and contract that requires it to be perpetually maintained for eternity. Many locks secure it away from the general public and even though it’s located on one of London’s busiest streets, most people aren’t even aware it exists. Fortunately for us, Peter Mark May has given us access for a limited time. Let’s open up those solid oak doors and see a bit of what goes on at Forky’s House!

The house is entirely walled in, with a cemetery on one end and a locked iron gate on the other. Besides that, the entire place is surrounded by trees, which render the huge stone building invisible to the rest of the world. All the better to hide the evil within, because even the grounds that the house is built upon are tainted. May wastes no time showing us the power of Forky’s House, when the caretaker and estate agent arrive with plans of sprucing things up a bit in an effort to make some rental income with the old place, they stumble upon a secret doorway that leads them to a secret room. A horrible experience awaits them inside that is so bad and unexplainable that the London Police order the house to be permanently closed until someone can set things to rights.

Enter haunted house specialist, Nick Hobbs. He is tasked with finding out the secrets of Forky’s House by a mysterious old man who looks like a tramp but seems to be more important. Nick is a young gadabout who enjoys drinking and one night stands with the ladies. So at first, he seems a very unlikely spiritual repairman. However, appearances can be deceiving and Nick jumps right into Forky’s House with both feet. He also does a lot of good in the surrounding community when he saves an older movie actor from a gang of gay bashing toughs, puts regular income into the area, and develops a beautiful romance with a woman who’s been through some very rough times along with her autistic son. It even looks like he might just tame the evil that lurks inside the ancient old house that seems to have many names. But the big question is, will he succeed in the end or be eaten alive by Forky’s House?

The answer to that question depends on you and the purchasing of this riveting book that is full of good and evil. Captivating details abound in this story and fill your head with an assortment of highly memorable characters. Some of them, like rock and roll singer Billy Ryan, the crazed Dr. Forgue, and Peter Gates are tied to the house in rooms that aren’t always there. Others like Lionel, a loveable rogue, and Crina, the cleaning lady who becomes so much more, are free to move about the world at will. Or are they prisoners of the events that shaped their lives?’ Confusing? Yes and no. Because there are biblical elements to this story as well. They are inserted so carefully that you might zip right by them on the first read through, but they offer signs of how this tale will end. Nick always dreams of four figures approaching across the desert sand for example.

How would I rate Forky’s House between one and five stars? This gripping, suspense-filled novel rates a good 4 stars in this reviewer’s opinion! An ancient house with a dark history and secret rooms, engaging characters, and a complex story line that includes a professional assassin are all great. The use of detail is excellent and puts the reader right on site. But the amount of typos is significant and occasionally distracting. The other issue for me was the ending of the story. I felt that it could have been better and gone in a different direction for a stronger finish. But that is merely my opinion. Yours may be completely different. Either way Forky’s House by Peter Mark May is a great read that captures readers until the intense conclusion. Macabre Ink is an imprint of Crossroad Press and you can find all of Peter Mark May’s books on Amazon.com or at your favorite bookseller. Want to learn more? Visit the author’s website at: http://petermarkmay.weebly.com/