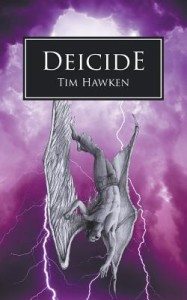 The third and final book in Tim Hawken’s Hellbound Trilogy has just been released worldwide. Titled Deicide, the novel concludes the epic story, which depicts a world of Hell never seen before.

Hawken expressed his excitement about the release of the novel, saying, “I’ve been living in this twisted world of Hell for almost five years now, so it’s refreshing to be able to emerge on the other side and take a breath. The response from readers has been overwhelming so far, I can’t wait for them to see how it all ends.”

To celebrate the release, Hawken’s publisher, Rethink Press, is offering the first two titles in the series, Hellbound and I Am Satan, up for free on Kindle for a limited time. The promotion runs from Dec 9th for five days. Commissioning editor of Rethink, Lucy McCarraher said of the giveaway, “It’s great to be able to give something back to old and new fans alike. For those who are yet to delve into the series, it’s a fantastic opportunity to get a taste. For existing fans who have the paperbacks, but now use eReaders, it’s an easy way to convert something they know and love into a new reading experience.”

Early acclaim and a strong cult following for Hellbound meant Hawken’s work has also captured the attention Hollywood. The author has recently signed partnerships with both Luber Roklin Entertainment and Savela/Kabatoff Productions to help bring his vision to the silver screen.

Deicide is available from all good book retailers, in both paperback and ebook formats, via Rethink Press. To get your free Kindle copy of Hellbound and I Am Satan, head to Amazon.com