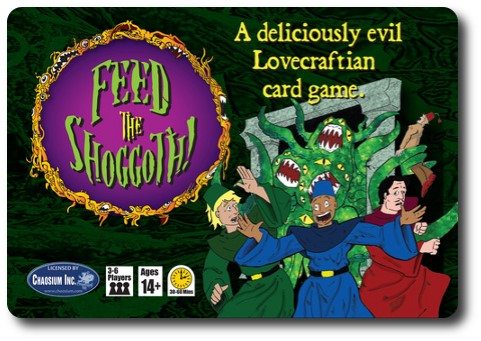 There is a running joke that Cthulhu is a lot like bacon: just add it to anything and it makes anything better. Now there is something to be said for that (a little bit of Cthulhu goodness does spiff up a lot of things), but when you have something that gets Lovecraft and the weird world of horror he created that loves it, that isn’t just cashing in on a hot namedrop, well then that is a special and wonderful thing indeed. That is the case with this newest combative card game: Feed the Shoggoth!.

Feed the Shoggoth! is comprised of 72 play cards (which are a collection of actions, spells, and artifacts), 36 minion cards, 10 cult faction cards, 1 Shoggoth (what else are you gonna feed?) and 1 graveyard card. All of the cards have a dull-shine to them and are about as durable and thick as standard playing cards. Each comes adorned with cartoon-like illustrations reflecting the weird world of what’s commonly known as the Cthulhu Mythos. If these cards’ influence leans one way or the other, it is more towards the famous Call of Cthulhu role-playing game than the more serious stories by author H.P. Lovecraft. But hey, it’s a game, so that’s fine by me.

The action in Feed the Shoggoth! is pretty fast and furious, and is a mix of challenging and fun. Each player is the leader of a different cult, each with a special ability. They all have a common foe: the always hungry and immensely frightening shoggoth, who they are trying to summon and control. Silly cultists. Each round the shoggoth is moved, compelled, coerced by one of the players either towards them, or perhaps towards a competing player. If the shoggoth is in front of you then you must sacrifice one of your loyal cult members/minions to feed it. After all, that’s the name of the game, right? If you can’t feed it, for whatever the reason, then the hungry, horrible shoggoth eats you and you’re out of the game. So yeah, the premise behind this game is pretty simple, but just past that is where the strategy, deviousness, and fun starts.

As the leader of a mystical cult, you have a number of black magic spells and arcane artifacts you can play to manipulate the shoggoth, protect yourself, or interfere with and damage the other cult leaders (players) in a number of wicked ways. Hey, they don’t share your faith, so they’re all fair game. Moreover, they have also summoned the same shoggoth, so if they don’t die, you will. Being a cult leader is a dirty, ruthless profession, sort of like being a politician, only more respectable. There are also more mundane action cards that allow you to do what the everyday layperson could do, such as dodge and parry – that, while not as magically flashy as the others, could still save your bacon. Oh and I can’t forget my favorite action card: the shoggoth burp. Mmmm, tasty.

Play begins by laying down artifact cards that can be used later, then if the shoggoth is in front of a player, they can start sacrificing minions to it, with each eaten minion giving that player a point. If the shoggoth isn’t in front of a player then they can play cards to move it to them and then they can begin to sacrifice minions. Naturally other players are going to mess with each other with spells, actions, and those aforementioned artifacts, in an attempt to win the game. They will want to move the shoggoth to them so they can start sacrificing and racking up points, or towards another player if they think they don’t have any minions to sacrifice and thus have them get eaten and knocked out of the game. In essence, the game is sort of like a tactical tug of war with the titular creature. Knowing when to bring it to you, when to keep it at bay, and when to sic it on one of your fellow players is key. It’s also a whole lot of fun.

There are two ways to win this game. The first is when a player scores enough points by sacrificing minions to win – that magic number is determined by the number of players in the game. The other way is very Highlander. That is, “There can be only one”™ and all the other cult leaders, but you, must have been eaten by the ornery shoggoth.

So if you are a fan of the Call of Cthulhu RPG and want to do something different on game night that still involved Cthulhu & Company, this game is a must have. If you are a fan of H.P. Lovecraft’s stories and the works of the wider Cthulhu Mythos and like fun and games, this game is a must have. If you have no idea who the hell Lovecraft is and have never read any of this tales but still want to play a fast and fun card game, this is a must have. So yeah, it’s pretty much a must have. Get it, and don’t forget to keep that shoggoth well fed. If you would like to get this game, you can order one directly from the publisher at feedtheshoggoth.com.