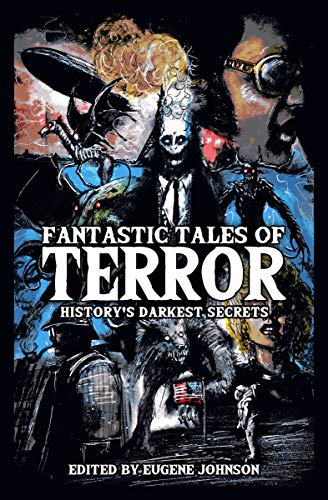 Weighing at 570 pages, the Eugene Johnson edited anthology is alternate history-themed, where famous names and historic events take place with far more supernatural undertones than history books might suggest. Yes, there are events that a reader might consider overdone – the sinking of the Titanic (“Unpretty Monster” by Mercedes M. Yardley) or the disappearance of Ambrose Bierce (“La Llorona” by Cullen Brown), but the twists the stories take are such that they reinvigorate the concept with twists and surprises. The crash of the Hindenburg (“Mutter” by Jess Landry) in particular, has a twist at the end that was delightfully unexpected. The highlight of the anthology is “Gorilla My Dreams” by Jonathan Maberry, examining the periphery and logistics of a classic film character in New York City. Faye Wray would never have stopped laughing long enough to become a scream queen.

Another, more serious highlight is Christopher Golden’s “On a Train Bound for Home,” a sequel of sorts to the Harry Houdini (H.P. Lovecraft ghost-written) story “Imprisoned with the Pharaohs,” which appeared in the May-July 1924 issue of Weird Tales. Houdini finds himself in another deadly trap sprung by vengeful cultists, and this time, the danger is a different Mythos than Egyptian mythology.

The entire book is a fun romp through history, with some inside jokes that work even better if you recall the original version. In fact, there is only one misfire in the book, “Articles of Teleforce” by Michael Bailey, chronicling a rumored death ray that Tesla was working on. The story jumps back and forth from modern day conspiracists hacking the government database back to Tesla’s fragmentary letters to newspaper articles. The jumping back and forth to form a patchwork plot is a hackneyed formula, and the author has Tesla corresponding with Mark Twain in 1933. Considering Samuel Clemens died in 1910, it forced me out of the story to fact check Clemens’ death and found it difficult to return with the leaping across time periods.

The problem with an alt-history anthology is that you’re never sure if it’s an egregious error or deliberate plot twist. Since the correspondence didn’t progress the story significantly, it remains a mystery to me – a mistake or deliberate but unnecessary, and if so why? In fact, the error bothered me so much that it also pulled me out of the next story about the extinction of the dinosaurs to fact check as well (“Sic Olim Tyrannis” by David Wellington, by the way, did have the correct species in the correct era). This is not to pick on Bailey, but Crystal Lake Publishing has raised the bar so high with the book’s authors that any slip was going to stand out.

Jeff Strand, who never disappoints, gets to play with Buster Keaton. The reprint of Joe Lansdale’s “Bubba Ho-Tep” is a welcome addition, even if the Bruce Campbell movie fans won’t recognize the source material. And you never can go wrong with ending an anthology with Neil Gaiman. His David Bowie story “The Return of the Thin White Duke” is also a reprint, the story’s first appearance since Bowie’s death, and it remains the perfect tribute and the perfect story to end an outstanding anthology.