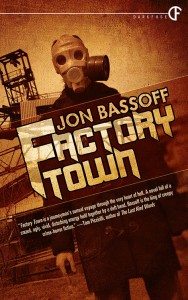 It’s only been one year since Corrosion became a psycho-noir hit, and those who found themselves caught up in its weird web of depraved secrets have all wondered if Jon Bassoff could do it again. The short answer is yes. Be prepared, though: Factory Town is not Corrosion 2. Bassoff has resisted the temptation to do what some authors do after a success, shifting around a few details and essentially writing the same book again, afraid to break the spell. Instead, he’s crafted something startlingly original. It’s not only different from Corrosion — it’s different from anything else you’ve ever read.

Reviews of Bassoff’s books, you may have noticed, never talk too much about the storyline. They can’t. To reveal too much would be like giving away the secrets of a magic show. (If you want to know how a woman gets sawed in half, then you’ll have to peek behind the curtain yourself. In other words, read the book.) Factory Town begins with a mysterious suicide, the who and why unclear, then moves to the eponymous town: a decaying post-apocalyptic wasteland that feels, by turns, historical and futuristic. Timeless. Russell Carver navigates the ruined landscape in search of a missing girl, encountering what seems like an endless parade of bizarre characters and depraved acts beyond anything ever imagined by Hieronymous Bosch—and more hellish.

Factory Town is a challenge, and if that word grabs you, then you’re the intended audience. It requires close attention to detail and a desire to figure things out. The plot seems haphazard at first glance, like a dream that goes on and on, moving from bizarre event to bizarre event. Where is this taking place? What’s real and what’s not? Is any of it? But then something happens. You’ll start to notice things. Connections form. There’s a moment in Factory Town when you’ll start to realize what these strange happenings mean, and it’s a dark moment, because it’s when you know that even the worst of the atrocities are connected to something very real — and very frightening.

You’ll probably recognize things in Factory Town from your own dreams, though just what those are will vary from person to person: the endless corridors, the decaying hospital, the creepy theater, the parties populated by disfigured degenerates. You’ll know them, just as you recognize, say, your grandmother’s kitchen in a dream, even if it’s flooded with water and underneath the ground. In our own dreams, we often miss the meaning because we’re distracted by the landscape. That’s what happens to Russell Carver, and it will also happen to you as you’re reading. Carver keeps looking, and you will too. We’re always trying to find out what our dreams mean. Maybe it’s best we don’t know.

A small downside to the book is that if you’re not patient, the lack of an obvious plotline for much of the book can be difficult. As the depravities pile up, it’s easy to become immune to them and lose any sense of urgency. The fact that Bassoff can make the reader numb to such atrocities is a feat, though, and, I suspect, part of the point. He’s taking real literary risks, and has found a singular voice. A lot of names got thrown around after Corrosion, comparing the author to Jim Thompson, David Lynch, Flannery O’Connor, and a slew of others. While they’re apt comparisons, the truth is: Bassoff is emulating no one.

You could call him a breath of fresh air, but it’s not quite the right metaphor. Not when the air smells so much of rottenness and death.