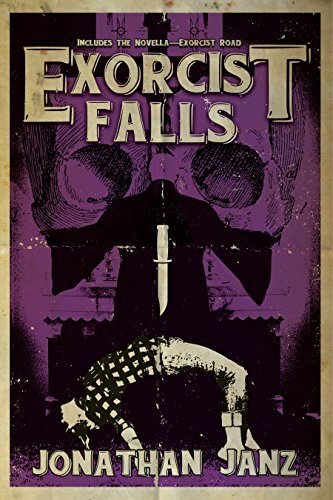 Ever since William Peter Blatty wrote the iconic novel The Exorcist, authors have been trying to repeat the feat, some out of a love of the author and a desire to pay tribute, and some hoping to cash in on the book’s resounding success. But, whether trying to emulate the the film or the book it’s based on, those attempts have been largely, if not universally, unsuccessful. Blatty’s own successive attempts to duplicate that former success largely failed; even while being good books in their own right, their acceptance by readers was relatively tepid by comparison. And the reason for that is simple: The Exorcist set the bar so incredibly high that it’s seemingly impossible to surpass and folks have pretty much stopped even giving it the effort of an earnest try. Then along comes author Jonathan Janz. With his works Exorcist Road and the sequel that I’m talking about today, Exorcist Falls, you can almost see his thought process and the approach he’s taken in creating these two great books. He seems to be thinking, “what if I don’t try to emulate the inimitable? What if, instead I take it and run with it, use it for the seed of an idea to form my own creation, something written the way I write things?” And that’s just exactly what he’s done here.

While Exorcist Road and, to a much lesser extent, Exorcist Falls does pay some playful homage to Blatty’s masterwork of the trope, it never comes remotely close to pastiche, being more of a wink and a nod sort of honor and then moving on into Janz territory, becoming a thing darker and more violent than The Exorcist was, and also a much, much faster-paced read than that behemoth was. That’s not saying that Jonathan Janz’s new book is skimpy by any means, just that the pacing is much higher octane and the action of the in your face variety is absolutely punishing in its intensity and the crackling tension that he’s so capable of generating often through mere eloquence alone.

Whenever I review a Jonathan Janz novel, I almost always mention straight off the bat that what makes Janz’s work read so well is the people. And that stands as true of Exorcist Falls as it does of any of his books. His characters are all delightfully alive and exquisitely broken and he has a great knack for bringing you into the thing and making you—willing or not—an active participant, encountering the breakage first hand and coming out the other side feeling like you’ve been somehow changed, that you’re inexplicably different and better for the overall experience. Another thing I bring up a lot is the fact that Janz is that rarest of young authors, one who knows his limits and knows that there are always—and always will be—ways to improve his ability as a writer, that the learning and growing should never cease and that each successive work should be a notch or two higher on the ladder than the previous one. And not only does he know it, he does it. Exorcist Falls is his best book to date and, for several reasons that I’m going to tell you about, shows more drastic change and improvement than any of his previous works.

And here’s why. If you follow him on Facebook you kind of get to tag along with his reading habits because he, like many of us, talks about genre fiction and reading a lot. He also talks a lot about how every time he reads one of the masterworks of the genre, he learns something new. A lot of the books he’s been talking about recently are stories by giants of dark fiction such as King, Ketchum, and the great American storyteller, Joe R. Lansdale. It’s evident in spades that he’s learned a lot from his reading of late, and not just intellectually speaking. He’s absorbed those lessons and made them a part of himself and his work, and it’s apparent in Exorcist Falls, where he demonstrates the most marked improvement of his career, offering up the best pacing, characters, and dialogue that he’s ever shown us. But the things that really stand out above all of the other storytelling elements I’ve mentioned so far, the things that make this book so remarkable, are the incredibly vivid, often excruciatingly painful imagery and the brilliant, relentlessly violent, character-driven action that permeates the story from beginning to end. Janz hits the ground running and refuses to slow down until the final, agonizing impact. You’re going to want to brace yourself because the collision isn’t gentle as he presents you with unspeakable, wholly unexpected horror and dares you to look away.

I’ve said it before but it bears repeating: Jonathan Janz is one of most talented young authors working today, setting himself some high bars and and almost unattainable goals, then somehow managing to achieve them. Every new thing he brings us is a sublime example of the supreme talent he has and the uncanny ability to immerse us so fully in the story that we come out the other side feeling like Geppetto after he escapes the whale. If you haven’t experienced the sheer reading pleasure that Janz has to offer, you want to change that, I promise. Start here with Exorcist Falls and then go get all of his other stuff too.