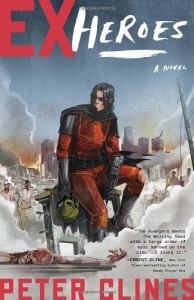 Zombies are one of the biggest things going on in horror fiction these days. There are countless novels about them in every conceivable situation. But what about zombies and super-heroes? I know that Marvel Comics has put out some comics and graphic novels about the Marvel Universe dealing with a zombie apocalypse, but EX-HEROES was the first supers vs. zombies story I’ve encountered in prose format.

The plot of EX-HEROES is pretty straight-forward. It’s set in a world very much like our own, except that a few, mostly minor-powered super-heroes began appearing a couple years previously. Then, inexplicably, a catastrophic zombie pandemic occurred, essentially wiping out human civilization. Many of the super-heroes perished in the initial outbreak or its immediate aftermath. Those who survive manage to gather a few hundred human survivors inside a Hollywood movie studio, which they convert into a fortress. The survivors must deal with the problem of trying to scavenge the necessary staples of life while fighting off zombie hordes as well as what I can only describe as some zombified super-villains. The premise is played straight in EX-HEROES, always a difficult task in super-hero prose, and there’s a genuine sense of menace and danger throughout.

Clines is a terrific writer who has generally done a great job of developing the personalities and backstories of the super-heroes as well as crafting a unique origin for a zombie apocalypse (I won’t spoil the specifics of that, save to mention that it is very well done). He alternates between chapters depicting the current plot and chapters detailing the super-heroes’ backstories, which also present the lead-up to the zombie apocalypse. This structure worked very well to both build tension and explain exactly what was going on. EX-HEROES is a truly vivid piece of storytelling.

I feel obligated to note that there is one major plot hole in the novel that practically invalidates the entire premise. One of the surviving super-heroes is named Zzzap. He is essentially a man who has been transformed in a teeny-tiny star, with all the advantages that that implies. Nice guy, apparently, though we never really get a sense of his personality, but he’s stuck in that form. In the climax of the novel, we see Zzzap fly through the heads of hundreds of zombies, incinerating what’s left of their minds and rendering them inert, accomplishing this feat within a few seconds. Just prior to this, another character asks him why he doesn’t do just this and he says that he finds it gross. Sorry, Zzzap, it really doesn’t matter if you find it “gross.” Human civilization has collapsed and the few remaining human survivors are menaced by over five million zombies in the Los Angeles area alone. I’m sure that the human survivors who are forced to shove pikes through zombie skulls while fighting for their lives also find that pretty darn “gross.” Zzzap should have been out there destroying a couple hundred thousand zombies a day, every day, taking care of the whole problem in a couple weeks at worst, long before the start of the novel. It seems obvious that Zzzap should not have been included as a character in EX-HEROES; he’s simply too powerful compared to the rest of the heroes. But I guess since Zzzap is squeamish it’s ok.

That one issue aside, I heartily recommend EX-HEROES, particularly to super-hero fans, or those looking for an entirely original kind of zombie novel. It was a quick, fun read. There is a sequel, EX-PATRIOTS, though I frankly have no idea where Clines plans to take the story next. The current batch of foes is left defeated or destroyed by the end of EX-HEROES, so I can only imagine that the story will go in an entirely new direction. I’m looking forward to more from Clines.