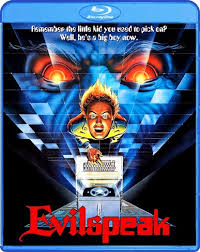 Confession time: this is the first time I’ve seen this 1981 horror movie, and you have no idea how rare it is for me to have not seen a fright flick from my favorite decade of cinema. It is one of those movies that I thought I had seen, but when I sat down to watch it, I quickly discovered that I hadn’t. Therefore I had no warm, fuzzy feelings of nostalgia to color my opinion of it now. And maybe because of that, I wasn’t blown away by it. But was it horrible? Well grab your big book o’ evil and your comically out of date computer, and let’s speak about some evil.

Clint Howard plays a much bullied young man named Stanley Coopersmith who is a reluctant student at a military school. While he is not the stereotypical nerd, and he seems like a nice guy, he’s not very good at soccer, and that seems to be enough of a reason for everyone, including the adult staff, to hate his guts completely. One day while cleaning out the school’s basement he discovers a long dead Satanist’s journal (said Satanist played by Richard “Night Court” Moll) that he begins to read. Once some creepy, and bloody, things start to happen, Coopersmith begins to transcribe the book into a computer and somehow that brings the ghost of Richard Moll back to life. Because hey, it was the early 80s and computers were akin to magic back then.

Soon the power of the devil is running wild in the school. Or at least, it runs wild for the last 10 minutes of the film. The vast majority of this movie is Coopersmith’s trials and tribulations at military school and it is anything but a horror movie. Nor is it all that good, to be honest. There are the (very) occasional deaths to spice things up, and some of those are fun, like the lady getting eaten by pigs in her bathtub, but the majority of this movie is a bit of a chore to sit through. It’s pretty much just people picking on Howard, him running away and typing more of his Satanic book into a computer, there are some dodgy animated effects, and then more people pick on Howard, he runs away to type on a computer, etc. Wash, rinse, repeat.

That said, the climax of this movie is made of pure awesome as Clint Howard floats around with a big ass sword, cleaving people’s heads in twain, causing folks to burst into flames, and having a hoard of man-eating pigs munch on the rest. This ending is gloriously fun and over the top, but is it worth sitting through the rest of the mostly boring movie to get to? No, sadly it’s not.

Regardless of my feelings on the film as a whole, the new Blu-ray from Scream Factory is like most of their releases, very good. First off, the HD update makes this movie look better than any largely forgotten early 80s flick has a right to. It also brings a few nice extras to the mix, like a commentary with producer/director Eric Weston, and interviews with lots of people from the film such, including Clint Howard and the aforementioned Richard Moll. The always present trailers round out this surprisingly impressive list of extras.

So Evilspeak didn’t really speak to me, but it does have a small cult of horror fans that love it. If you are part of that cult then rejoice, as this is easily the best version of this movie to ever come out. If you’ve never seen it, and you’re a fan of somewhat cheesy 80s horror movies, then maybe give it a chance. Just temper your expectations and you’ll probably get more out of it. Consider it mildly recommended.