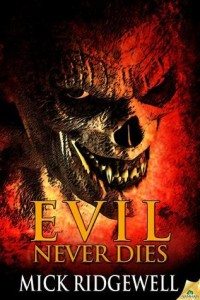 Newsman Roland Millhouse has been given what he considers a fluff-piece assignment: to interview Patricia Owens on the occasion of her 120th birthday. Expecting a fragile if not decrepit old woman, he is startled when the woman greeting him at the door of her aging farmhouse looks to be a sprightly seventy…or perhaps younger. At first his questions are typical, including the standard “how do you explain your longevity?”

He received his second surprise of the day when she responds: “The short answer is, the reason I have lived so long is that evil never dies.”

From there she begins her story—a detailed account of the summer of 1912, when the small Canadian community of Kings Shore underwent a terror that left it forever marked. Referring to a thick journal covering that summer, Patricia embarks on a tale of death, demons, and vampires.

Evil Never Dies presents an intriguing re-imagining of the vampire, specifically the Nosferatu-style creature, inhumanly swift and deadly, as first the “old one,” then his newly minted followers ravage the small town, destroying everyone Patricia loves. The novel creates a deliberate pacing by interrupting the back story with present-time details—walks to the cemetery where the victims are buried; to the abandoned farmstead and the rock-capped well that contains a horrible secret; or simply to the front porch to refresh themselves with lemonade. As a result of the shift from past to present, Patricia’s story reveals itself almost agonizingly slowly, paralleling her increasing debilitation and apparently rapid regressing to her true age.

As useful as it is as a narrative device, the shifts also create problems. The main story—the incursions of vampires into a small, enclosed community—often seems little more than an adjunct to drinking lemonade or taking walks, since those mundane actions are given as much attention as the horror itself. After a while, the breaks seem more artificial than essential, distractions from the evolving revelations concerning the vampires. In addition, there is a certain amount of unnecessary repetition throughout—as when Roland reminds us again and again how agile and youthful Patricia was on that first day and how much older she looks.

If one can overlook those two difficulties, Evil Never Dies becomes a well thought out re-creation of the late nineteenth- early twentieth-century vampiric milieu, such as was established in Stoker’s Dracula (1897) or, perhaps more to the point, Murneau’s Nosferatu (1922). The creatures are terrifying, the image of evil trapped at the bottom of an ancient well, the specter of graveyard headstones standing as silent witness to horror—all work to make Evil Never Dies a worthwhile read.