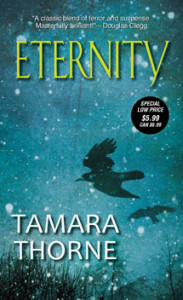 It was not necessarily Hannibal Lecter’s vicious ingenuity that riveted us, but rather his sense of “play,” his sniffing at the airholes and identifying the brand of Clarice’s perfume, his insight to her humble background with a glance at her cheap shoes, his teasing voice sing-songing, “Closer…” when everyone knew he could already read her identification card through the bullet proof security glass.  The icons of horror have always toyed with their victims, some more overtly than others, but whether one’s preference leans toward Freddie Krueger rasping campy one liners through the side of his mouth or Michael Myers simply standing in the doorway wearing a ghost-sheet and his last victim’s eye glasses, the idea of “the game,” with all its borders and competitive nuances has always been a staple, or “macro-structure” for the things that frighten us the most.  In terms of setting we are familiar with the paradigm: a scatter of dark avenues, shadows, and sharp corner-turns, each offering a varied degree of irony within the funhouse, the snow covered foliage labyrinth, the warehouse, the tool shed.  And as our lead characters do the creep and shiver through the foyer of the abandoned mansion, not knowing that there is a figure lurking in the dark window on the third floor, (or in the basement behind the rusted water boiler) we manifest reactions in one of two ways during the scare moments.  The former would be a scream, short and sharp.  The latter is a smile and even though it’s really a grimace, a grin is a grin after all.

Horror and humor are strange bedfellows, and they are having an affair, not a “fling,” not a “tryst,” but a love affair based on compulsion, lust, and ravenous greed.  And the last thing we all want to do is admit there is some sort of union in the first place.  Laughter is childlike, cathartic, festive, pure, and while we know it can have its cruel tinges in those formative years in the schoolyard we work hard throughout our lives to cultivate a measure of wit that defines healthy personas reflecting  perspective.

Author Tamara Thorne would remind us; however, that Jack the Ripper toyed with the police, snorting up his sleeve, offering riddles and clues with an implied background laughter so potent and maniacal that it still colors our imaginations.  The Ripper is a character in Thorne’s novel titled Eternity by the way (original printing in 2001, e-book released in 2012, new edition paperback to be released in the fall of 2013) as is Elvis Presley, Jim Morrison, and Ambrose Bierce.  The town she creates also boasts U.F.O. sightings, New Agers, cult members on the mountain, and Bigfoot cut loose in the grid, and at first glance it would seem that Thorne botched the recipe, dumping too much of one side of the cookbook into the old pitted kettle, making it curdle and blacken into a parody of a parody.  Still, this is no piece of slapstick.  It is an intricate patterning of setting and characterization that both makes for a wildly entertaining read and repioneers what we thought was “the game.”

Thorne architects these curious boundaries by first grounding the fantastic inside the familiar, and she does so in layers, making every outlandish notion or cliché counteract with that which we would hold close to the heart.  While extra-textual concerns are not entirely relevant for the purposes of this review, it should first be mentioned that a motif ever-present across the Thorne canon seems to be that of an odd Americana, represented by road attractions, tourist traps, and souvenir shacks the reader is meant to relate to, if not through the specific details, then by way of association.  Thorne paints a picture (in this case through her lead character’s memory in Eternity) of families taking epic car trips, singing songs, telling jokes, and eating sandwiches from the cooler, and thus taps into our collective fascination with those lean to’s, log cabins, gravel parking areas, and backwoods walking paths leading to “alligator farms and trading posts…The World’s Most Horrifying Mutant Discovery…Authentic Indian Fossils, Dinosaur Bones-Cheap, or even a simple mound of Martian Mystery Rocks” (41).  Thinking back, we sometimes did actually convince Dad to pull in and pay the $5.50 each to see the stalagmites, the swamp mummies, or the world’s biggest toadstool, it was hit or miss, but the reaction was always the same if he said “no” as we passed them: kids with their faces pressed up against the windows saying, “Pleeeese?”

Of course, while Thorne taps into these precious memories of childlike wonder, she makes a bold parallel (or rather a leap) by putting on open display the aforementioned citizens of Eternity and their outlandish rituals, all of them parading around town with a lack of abandon worthy of the freaks and geeks in a Jonathan Swift satire.  Still, we give pause before dismissing (or scoffing at) Thorne’s seemingly “weird” collective statement, and we hesitate because of the said fascinations we have dragged up from childhood, because of Thorne’s breathtaking descriptions of the landscape: “It was only two in the afternoon, but it seemed much later because the lodgepole pines and burgeoning redwood groves had closed in around him, blocking most of the sun, leaving it to dapple the road and forest floor with muted light (37), because the lead character Sheriff Zach Tully speaks for our cynicism and wins us over with his tragic backstory, because we are fascinated with serial killers, and for all the wacky characters in this wacky town of wacky ringers for historical archetypes, it is intriguing to see them all getting snuffed one by one.

The most interesting “game” Thorne constructs; however, is the one going on outside of the text where she toys with the reader directly.  In terms of set-up (or plot) she keeps it simple, like grassroots or foreplay.  The town of “Eternity” is plagued with murders that look eerily close to the work of Jack the Ripper.  Eternity is a tourist trap up in the hills with hiking trails that lead to a gathering of rocks they call “Little Stonehenge,” where it is said the air is different and odd lights dance in the sky above it in specific yet undeterminable patterns.  Zach Tully is brought in from the big city to solve the ongoing murders, while back home his own family was taken from him by a serial killer nicknamed “The Backdoor Man.”  As soon as Tully rolls into Eternity the eccentric townspeople start trying to sell him on their oddball convictions ranging from the presence of aliens to time travel, and at times we wonder if Tamara Thorne is presenting what she would deem “possible” through the paper-thin guise of her characters.

If Thorne solely built herself a cheap pulpit, however, would she not have used Tully-the-realist as her interpreter, finally (or gradually) uncovering as “new truths” all the wild propositions of psychic phenomenon littered throughout the piece, instead of merely having him witness with his own eyes a lone questionable instance in the climax?  Were she actually proposing the supernatural, would she not lean more on science and fact (or the lack of it) as opposed to snapshots of exposition offered by characters who are admittedly unbalanced?  All through the story, players masquerade as famous “others,” as if Tully stumbled upon some massive carnivalesque museum made into a roadside curiosity shop; the only things missing are the mugs, the keyrings, and the two-headed snake.  And all these peculiar characters speak in a tone of doubled irony, claiming they really are the given people they claim to be, while giving a wink and a smile and further insisting that all the other imposters really come from Shady Hills, the local nuthouse.  Therefore, everyone is crazy.  Or everyone is covering something up.  Or everyone has been playing crazy so long they actually believe some of the con.  Or…

Of course, the foundational elements only represent the preliminary levels of Thorne’s reanimated playing field.  With Eternity we must not forget that there is a good old fashioned mystery swirling at the forefront, a love story brewing in the center, and a killer with a nasty sense of humor hovering over it all (or rather lurking behind us in the darkness of forest- cover).  So, who done it, anyway?  Thorne unloads for us a cavalcade of suspects worthy of a Cecil B. DeMille casting call, and there are so many to blame it becomes a dizzying sort of guilty delight.  There is a rolly-polly baker, a crackpot prospector, a nosy reporter, and two deputies so busy playing “good cop, bad cop” it’s rare they get any work done…all this in addition to cheap hookers, a sensitive coroner, a cross-dressing newspaper editor, and a fire hydrant of a medical assistant that makes Nurse Ratchet look like a Walt Disney throw-pillow.  And these are just the townsfolk Tully has the opportunity to meet during his first patrol!  Meanwhile, there is the lovely Kate McPherson formerly married to possibly the most distasteful ex-husband I’ve read in a decade (in his case we must make the wry joke that if you split up the word, “Therapist” it equals “The Rapist”) and this heightens our desire for Tully to win her.  Moreover, we can not forget that the central evil in this piece is Jack the Ripper, or one emulating him, laughing in the darkness and joking his way to the ultimate blood puzzle.  In all, Tamara Thorne puts on a clinic for artful genre – play in this clever “doomed town” piece  where enigmatic games are hidden by smoke, distorted by mirrors, and woven into the fabric of dark riddles positioned in a complicated web of master strategies disguised as mere pranks.  Is there something for everyone in Eternity?  Clearly.

Still, the magic here is not in the hybrid genre work, the love story, or the murder-show (even though it is a good one); it is not hidden in the characters (though they are expertly drawn) and it is not necessarily buried in the settings (which remind us of Hemingway in their detail and beauty).  The final, or rather, comprehensive enchantment in this particular Thorne story is manifested through her multi-tiered involvement directly with the reader, seeming to make assertions and then having her own characters laugh them off, coaxing us into this strange dance with the unreal and then offering proof that would discredit many of our new and cautious assumptions.  Tamara Thorne’s weapon is this imposed disequilibrium, where she awakens in the reader the ghost of the believer.

This is her game.

And it is a good one.

Michael Aronovitz is the author of the new novel Alice Walks by Centipede Press.