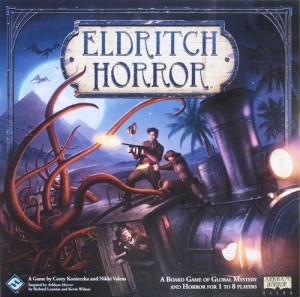 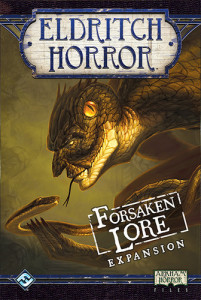 Eldritch Horror is a cooperative game based on the Cthulhu Mythos by H.P. Lovecraft.  In each game, the investigators (players) are working together to solve mysteries related to a particular Great Old One in hopes of preventing it from awakening.  By traveling around the globe, conducting investigations, going on expeditions, and gathering clues and assets, the investigators attempt to thwart the plans of the Great Old One and the impending doom with which it comes.  The Forsaken Lore expansion simply adds to all of the elements of the base game as well as adding a small additional rule.

OVERVIEW
In Eldritch Horror, each player plays an investigator with five core skills and a couple of unique abilities that will help them in overcoming the various obstacles throughout the game in hopes of stopping the Great Old One.  It’s a cooperative game where the players are working together towards a common goal, occasionally trading items with each other and coordinating their movements so that the most capable investigator is taking care of adventures that are best suited to their skills.
Each Great Old One has its own set of mysteries to solve, which makes the overall goal of the game a little more focused and the addition of the Great Old One waking causing the investigators to solve a fourth, more difficult, mystery.  This is a nice touch and a lot more thematic than in Arkham Horror, where a heads-up fight ensued and really failed to fall in line with the Mythos.  I mean, fighting Yog-Sothoth with a shotgun is really silly.
There is a Mythos deck that functions as a sort of timer and every round a new Mythos card is turned up.  An element that I like is that each Great Old One’s Mythos deck is constructed differently with varying degrees of difficulty that get progressively harder as the game goes on.  This is another difference from Arkham Horror that only serves to improve the game.  These also drive the game by spawning gates to other worlds, causing monsters to appear, spawning clues, and advancing the Omen track.  The Omen track functions to possibly move the Doom track (which awakens the Great Old One when it gets to 0) based on what gates are open.  All of this is very thematic and can cause the investigators to switch gears on the fly.
The game’s encounters will vary depending on the part of the world you are in as well as whether or not you are in a city, wilderness, or at sea.  There are also research encounters that can earn you those valuable clues, other world encounters that can let you close gates (thus slowing the Doom track), as well as expedition encounters.  Even though the base game only comes with a limited amount of these, there is still enough here for a few fresh games before you start seeing duplicates.  Fortunately, the expansion just adds more of the same.  This isn’t always a good thing for expansions, but in this case, it’s perfect.
One of the last bits worth mentioning is the acquisition of assets, spells, and conditions.  Assets include weapons, allies, and other great things that will help you on your journeys.  A great departure from Arkham Horror is that “camping” has been essentially removed from Eldritch Horror.  In Arkham Horror, there were certain locations that you’d have to travel to in order to acquire items, so you could, in essence, just camp out there until you drew the item you were looking for.  In Eldritch Horror, there are four available assets, which can be purchased in cities with successes rolled with your Influence characteristic.  If you fail to get a success, you can flush one of the items, but there is no camping – big plus.
Spells and conditions function in a similar fashion to the way the worked in Arkham Horror, with a VERY cool twist.  These cards are dual-sided and you don’t know what’s going to happen when you cast a spell or a condition activates (from the Omen track).  That Dark Pact you signed could cause someone to die or that spell could cause you to gain a psychological condition that will hamper you throughout the game – very neat stuff and totally in line with the theme.
If you manage to dodge all of the game’s dangers and plug away at solving the Great Old One’s mysteries, you will stop the cosmic destruction of the world and spare humanity from an eternity of doom.  Who wouldn’t like that?

The board is big, clean, and easy to read and the tokens are all nice and chunky.  The monster tokens are basically the same from Arkham and the cards are good quality as well.  The investigator and Great Old One sheets, while thin, are not flimsy.  The first player marker begs for some pimping and the inclusion of four smallish black dice is a bit disappointing, especially for a game where you often have to roll five, six, or seven dice or more.  Again, this is an opportunity for some good ol’ game bit replacing. 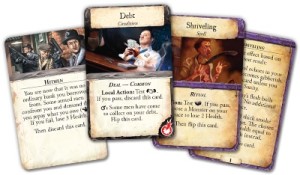 A sample of some of the game cards.

RULES
The rulebook is separated into a basic rulebook and a reference rulebook.  Initially, I was concerned, but I think that it works well to teach people the basic flow of the game and then allow the edge cases to be resolved as you play the game.  Once again, this is a case of Fantasy Flight learning from prior games and making improvements.

Unlike Arkham Horror, Eldritch Horror flows very smoothly.  A player’s turn is broken down into Action and Encounter phases.  One player does their Action phase and then the next.  Then the same happens with the Encounter phase.  You finish up with a Mythos phase and rinse and repeat.  It may sound simplistic, but it’s a welcome departure from Arkham’s massive amounts of fiddliness and myriad of moving parts.

It’s the kind of game that will play well with all player counts and while personally, I wouldn’t want to play a 5+ player game of this (and certainly not of Arkham), you could do so and not feel like you are waiting an eternity for your turn to do something.  You can even play it solitaire, with one investigator or by controlling multiples – something I used to do with Arkham and was mentally spent at the end of the game.

Edge cases and exceptions are really kept to a minimum in Eldritch.  Even simple things like weapon combat encounter bonuses not stacking or monsters not preventing you from leaving a city are nice touches.  There is a nice level of tension and it is an especially fun game if players are into reading out the flavor text.  Personally, I don’t see the point of playing this type of game if you aren’t going to do so.

GAMEPLAY
How does it play?  It plays smooth as butter.  The game flow is clean and easy to explain and though set up can take a few minutes before you’re playing, the game plays quickly enough that you can play a second game in the time that it would take to play one game of Arkham.  The encounter cards are fun and give a fair level of threat without feeling crippling.  Even if an investigator goes insane or is crippled in battle, they don’t just die.  You can encounter them – every investigator has encounters on their reverse side that can possibly get you their stuff.  The addition of the dual-sided cards is very cool as is the elimination of camping.  Clues seem hard to come by and even though they can be used to reroll a die, it seems like a waste to do so, considering that they are often needed for other vital effects.  It’s neat to draw a Mythos card that doesn’t hurt you too much and you facepalm yourself when the Omen track moves to the one symbol you could least afford or that ongoing Mythos card effect comes due.  In the end, if you fail to defeat the Great Old One, sure, it’s a bummer to lose, but you certainly enjoy the ride.  Even better, losing gives you that “let’s run it back” feeling that Arkham never did. 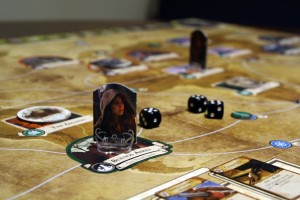 Diana Stanley only getting one success to gain an asset means no carbine rifle, a 3-success item.

FINAL THOUGHTS
If you’ve played or own Arkham Horror, you might be thinking, “Why should I bother getting this?  It sounds like a rehash.”  Well, in a way it is, but it’s a rehash in a great way.  Whereas Arkham’s near-constant expansions caused it to buckle and collapse beneath it’s own weight, Eldritch seems to have learned from the missteps of it’s older sibling and as long as Fantasy Flight doesn’t stray from the “more of the same” model of the Forsaken Lore expansion, this series will only get better and better.

All of Eldritch Horror’s small touches work together seamlessly and they force me to move my Arkham Horror game and expansions to the sale/trade pile.  It does what Arkham does better and in half the time.  Essentially, Fantasy Flight could re-release all of the previous Arkham material with Eldritch Horror rules and I’d re-buy all of it.  This is a fun game from beginning to end and I can’t recommend it highly enough.  That said, it isn’t perfect as there are some errata and rules clarifications – as to be expected with a game of this nature, but the key question is would I buy it again now that I’ve played it and the answer is a resounding, “YES!”

This game doesn’t need additional boards or copious amounts of rules and exceptions.  It’s excellent the way it is.  That’d be like saying doesn’t have the right amount of tentacles and that, my friends, is just madness.

I’ve recently been named as the Game Reviewer for Hellnotes.com, a site that reviews all things horror. If you’re a horror fan, feel free to check it out.