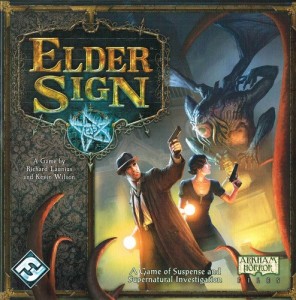 Elder Sign takes all of the elements of a big cooperative game like Arkham Horror or Eldritch Horror (future reviews) and condenses them down into a lighter game that plays in less time.  There is an expansion called Unseen Forces (another future review) that adds a few other elements, but this review will cover only the base game.  Does Elder Sign deliver the same experience as its bigger siblings?  Let’s find out.

OVERVIEW
Elder Sign is a game that blends action dice, cards, and H.P. Lovecraft’s Cthulhu Mythos in a game where investigators run around a museum trying to solve mysteries and overcome challenges in hopes of thwarting the Great Old One that is trying to enter the world and send humanity reeling into death and destruction.  The investigators collect rewards, the best of which are Elder Signs, by solving the mysteries.  The only way to stop it is to accumulate enough Elder Signs before its Doom Track fills up.  The players are going to want to prudently collect resources – spells, weapons, etc – to be able to leverage themselves to have the best chance of success on their adventures.  If the Great Old One awakens, the investigators’ only chance is to fight it face-to-face in a combat that is likely to end in defeat.  Who wouldn’t like that?

COMPONENTS
The components are very nice.  There are nice custom dice that have a pleasant tactile feel to them as well as 200+ cards, making for a pretty nice deal for the money.

The dice are wonderfully made and easy to read.

The monster markers and elder signs are nice chunky cardboard, but the investigators and doom tokens are small and fiddly.  The cards are pretty nice, being standard Fantasy Flight fare, but the flavor text is written in a font that is pretty hard to read. 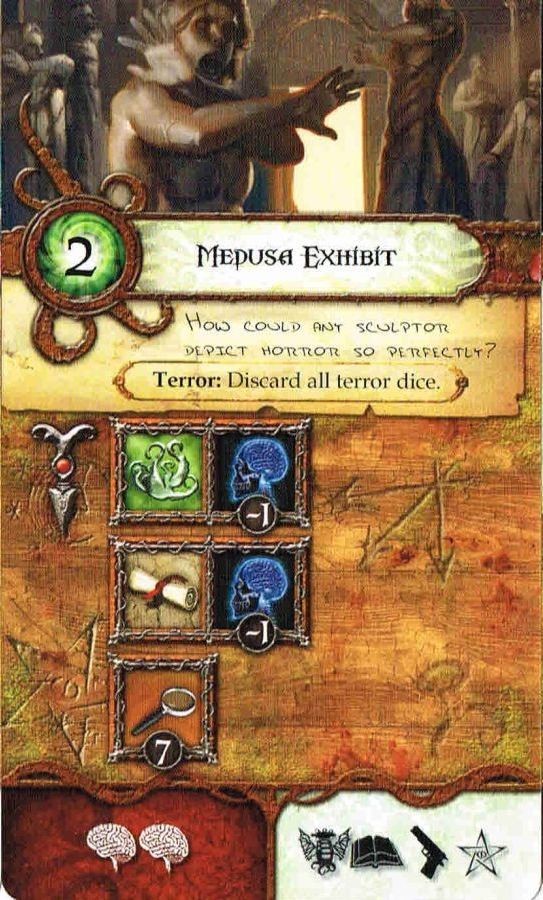 An adventure card – flavor text bad, everything else excellent!

Personally, I like to read flavor text in these types of games and Elder Sign doesn’t make the best effort to make this easy.  There is no actual “board” as the adventure cards make for the game’s tableau.  For a small game, it isn’t the very best you can expect, but it’s certainly far from the worst I’ve ever seen.

RULES
The rules are twelve pages and are well done with typically nice Fantasy Flight production values.  Essentially, the game boils down to each player picking an adventure from the ones that have been set out and trying to accomplish the tasks that are laid out on the cards.  Some cards have one task, some others have multiples.  When monsters are added to cards, they add additional tasks, making the adventures even more difficult to accomplish.  Each task requires rolling a certain amount of Investigation, Peril, Terror, or Lore, which is what the custom dice are used for.

The tasks are further complicated by occasionally costing health, sanity, advancing the Clock a mechanic that can add monsters to the cards via Mythos cards, Doom Tokens to the Great Old One, and other potentially awful effects. 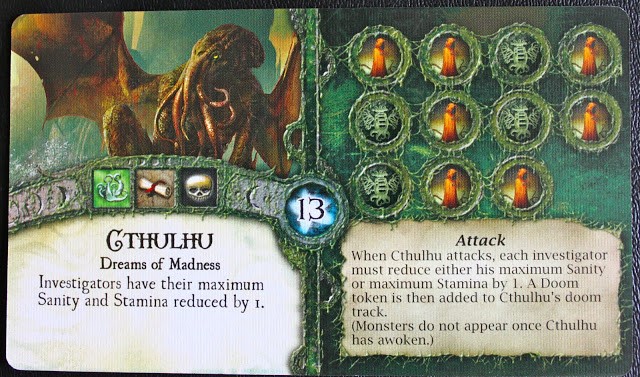 “Hi, my name is Cthulhu.  I’m here to decimate…well…everything.”

Items that you will pick up during the game are abstracted into giving you additional special dice, the ability to lock certain results, etc.  Some of the adventures have Terror effects as well that can make your life harder if you fail a task and roll a Terror effect.  They can also have Midnight effects that can make additional bad effects occur at midnight on the Clock.  Finally, they can lock dice making all tasks even more difficult.

GAMEPLAY
How does it play?  It plays pretty quick and gives a fun adventure experience in a decent time window.  We aren’t talking about the deepest gameplay in the world, mind you, but it’s fun and enjoyable.  It’s the kind of game that you can play with hardcore gamers, casual gamers, or even children.  Even when you’re getting swarmed by monsters and things are looking bleak, it can still be enjoyable and particularly fun when the dice decide to go your way, which for me is infrequently.

The base game allows for camping at the Entrance sheet, something that is eliminated in the expansion.  It also allows the purchase of Elder Signs, a game element that was almost universally house-ruled out of the game.  One of the common knocks against it is that the game isn’t the most difficult in the world.  This is certainly a valid argument that can be laid against it.  The expansion changes things up a little bit, but you certainly don’t need it to enjoy Elder Sign.  These things aside, the game is a fun little romp that gives you the Arkham Horror feel in a fraction of the time.

The iOS version of the game plays basically the same and gives you a good value for $7 for those times when you are on the run and what a board game experience on your phone or tablet.

FINAL THOUGHTS
Elder Sign is a good game, not great, but certainly good and one that you can play with lots of different player counts.  Whether the game turns out to be a tough one or a cakewalk, you’re sure to have a fun experience.  The knocks about the ease of beating the game are a non-factor for me and if you love the theme, they should be for you as well.

The fact that this game is playable with just about anyone is a pretty nice perk as well.  There isn’t anything particularly complicated going on here and that may be a minus for some.  It isn’t exactly Monopoly going on here either.  The push-your-luck element is one that I like.  Do you keep pressing on through adventures trying to get that bad midnight effect off the table or do you pause for a moment and try to heal up at the entrance?  Just because they aren’t deep decisions doesn’t make them meaningless.

At the very worst, you can check out the iOS version of the game, an especially good deal if you keep an eye on it to go on sale.  Check it out there and then, if you like it, jump up to the tabletop version.  The bottom line is that if you’re a fan of the Cthulhu Mythos, like or would like to play Arkham Horror someday and don’t have the time, and don’t mind chucking some dice and leaving your fate in the hands of the Great Old Ones, then Elder Sign might be for you.