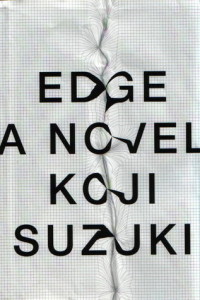 Edge can best be described as a novel about distance, in which our heroine Saeko begins studying the phenomenon of space and how it works. When an atom, the base particle of all physical things, is nothing but a nucleus and two electrons, what keeps objects from sliding through each other? When our solar system is mostly empty space, what keeps our planet revolving? Maybe, Saeko’s father joked one day, if the world’s atoms shifted just a millimeter, everything in our world would fall into another.

He never expected to be right. But when he vanishes without a trace one day, alongside many other people, Saeko realizes he just might have been. Something about space has changed, and that change is sucking people out of our world—but where are they going?

(This idea about distance carries over to our characters’ personal relationships and ideas: at some point before Edge begins, Saeko divorces her husband because she feels an emotional distance between them, for example.)

The plot relies on a lot of science lingo, but explanations are done in the form of conversation and plot-moving metaphors, so even those who can’t tell a neuron from a black hole, like me, can stay involved…until about the middle of the book. At that point, the book stumbles over long, rambling monologues that had me skipping pages (evolutionists and scientists may take more interest). At the same time, compelling relationships and storylines begin wandering, so I almost stopped caring.

Fortunately, before I got to that point, the story picks up again. If you find your attention flagging a couple hundred pages in, I suggest not giving up.

The end, I’m still not sure if I liked. On the one hand, it’s so exciting that I fought sleep to get through it. On the other hand, it kind of makes no sense. To solve the disappearing-people mystery, Saeko begins taking leaps of logic and “seeing” scenes from the past she can’t possibly know about. I still can’t tell if she was hallucinating or somehow putting pieces together in ways I just didn’t get. Given that magical third nipples and dismembered time-travelers in Machu Picchu come into play, I suppose anything is possible. Especially with all the science references that flew over my head.

Assuming that Suzuki just needed to wrap the story up and swept a few plot holes under a rug, though, I’d still say Edge is worth it. If nothing else, it grabs and entertains. Even at its most confusing, when I had to make sense of everything from time travel to psychics (while characters berated each other for thinking aliens might be involved. And rightfully so. Everyone knows it’s magical third nipples that make the impossible possible! I mean, aliens? How silly would that be?) I was intrigued, and rarely wanted to put the book down.

I recommend Edge to science people, who may get more out of it than I did. However, I also recommend it to people looking for a non-traditional beach read, because good lord is Suzuki’s imagination a trippily awesome place to visit.