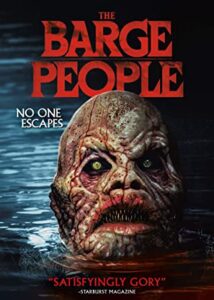 This one is a creature feature-meets-slasher in the lovely English countryside. It kind of spoils things from the jump, giving you a nice look at the critters right on the box art. That’s a shame, but that’s marketing for you. I can’t blame that on the filmmakers, can I? Well, this one is giving me a Humanoids from the Deep vibe, and that’s a good thing, so let’s dive in and swim around with The Barge People for awhile.

Okay, I can blame the way-too-early reveal of the mutant critters on the filmmakers, as things start off with them and little is left to the imagination. We also get a text crawl warning us that for ten years people have been disappearing from the English canals, so when a couple of couples rent a canal boat for the weekend, you know things aren’t going to go as planned. The story is bog (ha) standard, as the couples meet and then run afoul of some local yokels, but things take a savage twist when their barge is beset by a trio of amphibian fish-frog-men. That gave me a bit of a Lovecraftian Deep One feel, and that was cool. Dressed in regular clothes and wielding weapons and tools, it’s clear there is some human intelligence there, but they look anything but human and they like to eat their prey, as Gollum put it, “raw and wiggling.”

The couples must survive the initial boat attack and then try to escape a family of crazed cannibal mutants with ridiculous names like Razor, Blade, and Nail. Honestly, I think they would have been more frightening if they were called Bob, Tom, and Delbert, but I digress. There is some explanation as to what’s going on with the fishheads, as it’s said that the canals are polluted/infested with bacteria thanks to global warming, and while I do think climate change is a real thing, having it do this to people is just a wee bit of a stretch.

And that’s it for story: it’s pretty straightforward and simple, but that does not make this a bad movie. While some of the first kills are bloodless—or worse, happen off-screen—the goopy gore gags soon start in earnest. There’s some good stalk and slash action, a final girl chase, and a few neat confrontations with the baddies. There is a “twist” as to who is behind the frog-faced clan, but you can see that coming from a mile away, and so it loses any effectiveness as an “aha!” moment.

On to the extras and special features RLJ Entertainment put on this new DVD release. Aaaaaaand we’re done. Yep, like the picked-over corpses of dinners past, this disc is as bare bones as they get. Shame.

The Barge People is like The Hills Have Eyes, if it was set in the green and pleasant land of the English waterways. Okay, it’s really not, but it is some stupid, bloody fun. While it’s not destined to be a classic or anything like that, I had a good enough time with it while it was on. There is some good cinematography, the acting was workman-like but not horrible, and it had some decent gore. If you want a horror flick with an old-school feel, sure to remind you of those direct-to-VHS wonders from yesteryear, this will scratch that itch. If that’s your jam, then consider this one recommended.