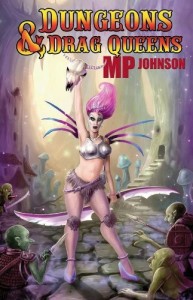 “Dungeons & Drag Queens,” the latest novel written by M. P. Johnson, is a sword and sorcery tale that plays with genre in much the same way that its drag queen protagonist, Sleazella, plays with gender and her own sexual proclivities. Once the most powerful drag queen in all of Green Bay, Wisconsin, she finds herself teleported to the fantasy world of Houmak in order to become the bride of the great old god Houmak itself. Sleazella doesn’t think this sounds so great, and her escape from the wizard Dravor sets off an epic adventure that spans the lands of Houmak and beyond.

Published by Eraserhead Press, filed under Bizarro fiction, and featuring an image of a pink-haired drag queen holding aloft a skull on the cover; there is nothing about this book that should make a reader expect a standard fantasy adventure story. This adventure contains enough tropes to be recognizable as fantasy, though. There’s a wizard with a familiar; there are gigantic monsters, strange creatures in the forest, warrior tribes and a mercenary hero with a heart of gold. However, Sleazella’s way of the world leaves all of this drenched in sex and raunch. Fans looking for a “straight” adventure should pretend they never even saw this cover.

Though it is still a young sub-genre, Bizarro contains a broad range of works of varying degrees of estrangement from mainstream storytelling. Accusing some of these books as shock for shock’s sake is fair and often the reach toward absurdity and surrealist confrontation get too much in the way of narrative. Happily, M. P. Johnson does not have this problem. This story, as driven by cartoonish satire as it is, still moves at a brisk pace and is always entertaining. Sleazella is a character with depth and she develops as her challenges force her to. Much more than a stereotype in high heels, she brings heart to a story that could’ve been a hollow parody.

There are a few gags that get a little long in the tooth, and some Sleazella’s one-liners aren’t as hilarious as the others, but I took this as all part of the campy fun of this book. This book is spawned from a cult cinema sensibility and it should be enjoyed with that spirit. There are scenes to be horrified by, to laugh at, and to find sympathy with in “Dungeons & Drag Queens,” but if you are tied to more traditional kinds of sword and sorcery this will not be your cup of pink blood. Sleazella is a master of swordplay, certainly, but it’s not the kind of sword you are probably thinking of.

T.A. Wardrope writes weird, horror and speculative varieties of fiction. His novel "Arcadian Gates" is available from Blastgun Books. Additionally he writes essays about film, music and literature for several blogs including Hellnotes and L'Etoile. Some of his non-fiction research has been published on Disinfo.com.