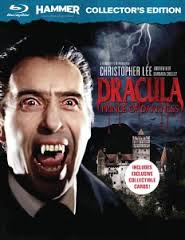 Easily the second most recognizable name in all Dracula-dom, right after Bella Lugosi, is Christopher Lee. Starting in 1958 for Hammer Film’s The Horror of Dracula (AKA just plain old Dracula) Lee has portrayed the bloodsucking count 10 times, easily more than anyone else. However some of those roles were slight to the point of being nonexistent. There have been various reasons given as the reason why Dracula is seen so little in movies with Dracula in the title, but the most accepted one, and the one that Christopher Lee has said himself on more than one occasion, is that he was literally blackmailed into doing most those sequels. Sadly, that seems to be the case with this movie, the sequel to the 1958 classic. Does that mean this is a bad movie not worthy of your time, money, or the Blu-ray treatment? Well grab a stake and a crucifix and let’s find out.

The movie begins with superstitious Eastern European villagers staking corpses to make sure they don’t rise from their graves, then quickly introduces a quartet of British travelers enjoying the ‘quaint’ locals and the darkly beautiful landscape. After a superstitious carriage driver (hmm, I’m sensing a pattern here) abandons them, another driverless carriage just so happens to pick them up. Yep, nothing weird about that. They are taken to a gloomy castle and meet a manservant just waiting to show them all kinds of hospitality, so naturally they spend the night. Little do they know that this is the castle of Count Dracula, who is currently dead, but has set plans in motion so he doesn’t have to stay that way forever.

Now in typical Hammer style, this is a gothic period piece, but also true to Hammer’s form, it looks amazing. The sets and costumes are great, the special make-up effects are pretty impressive for their time, especially a great resurrection for Dracula here, and all the actors here do admirable work. However, not everything it all peaches and cream with this movie and these odd choices keep this film from truly becoming a classic.

One of its biggest missteps is that Dracula doesn’t even show up for his own movie until well past the halfway mark in the runtime. And unlike Jaws that also famously used the titular monster sparingly for the first half of the movie, the time here is not used to build suspense, tension, or to create a sense of forbidding. It’s not exactly boring, as the actors are fun to watch, but it is far from exciting. Worst yet is the fact that Dracula does not say A SINGLE WORD in this entire movie. Yes, you read that right, not one word. He hisses and glowers with his bloodshot eyes, but that’s it. Supposedly that was Lee’s defiance as he didn’t like the poor dialog Dracula was given in the script. Others deny that and claim Christopher Lee was just upset at being forced to play Dracula again. Whatever the reason, it’s just very odd, a bit annoying, and mostly just a damn shame. Christopher Lee is a fine actor, but he can only do so much with minimal screen time, spooky looks, dramatic gestures, and snarling hisses.

Now however you feel about this movie, the new Blu-ray from Millennium Entertainment is a beauty. Dracula Prince of Darkness looks great in HD. Yes there is still the occasional grain or pop and crackle on the screen, but the colors have been greatly enhanced. The blacks have never been darker and the reds never more crimson than they are here. Millennium has really done a great job in transferring this movie to Blu-ray. As for the extras, there is a cool cavalcade of goodies to be found here. There is a commentary track with Christopher Lee, Barbara Shelley, Suzan Farmer, and Francis Matthews this is both entertaining and informative. There is a 25 minute episode from the multipart series The World of Hammer all about Christopher Lee that’s narrated by Oliver Reed and is pre Hammer Films fan bait. There is a 30 minute documentary about Dracula Prince of Darkness called Back to Black. There is a featurette that compares the new HD restored print to the old one, just to show off how much work they put into making this movie look pretty. There is the original trailer, which Millennium also restored because hey, why not? Last but not least, there is also the ever ubiquitous still gallery. As an added bonus, the Blu-ray even comes with some pretty collectible cards that are scenes take from the film. Ohhh, ahhh.

So this release has one of the classic teams up of Christopher Lee with Hammer Films, and has Dracula looking great on Blu-ray and loaded with extras. It is a good film, and I enjoyed revisiting it after not seeing it for many years, but sadly it is not a great movie. The lack of Drac for the majority of this movie really hurts it, and the lack of any dialogue spoken by the king of the vampires is just another stake in the coffin. However if you are a Hammerhead, a vampire lover, or just a collector of the horror classics, you’ll probably dig this movie like a ghoul in a graveyard. If you’re new to Hammer and/or Christopher Lee’s take on the famous bloodsucker, this isn’t the best place to start as you will likely be underwhelmed. Still, Hammer is like pizza, even when it’s not great, it’s still pretty good. This Blu-ray comes out Sept. 17th, consider it moderately recommended.