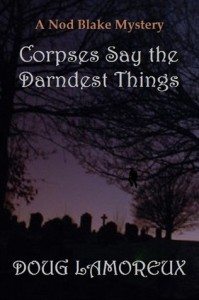 It was a simple job, babysitting really; keep surveillance on the minister’s wife until she went safely to bed. Then all hell broke loose! Igor Award-winning writer Doug Lamoreux, author of Dracula’s Demeter, The Melting Dead, and The Devil’s Bed, brings you his newest journey into mystery/terror fiction, Corpses Say the Darndest Things.

The death of Katherine Delp, wife of Chicago’s most beloved televangelist is only the beginning. Someone is homiciding their way through the congregation of the Temple of Majesty Church and, thanks to his eager and awkward young secretary, private eye Nod Blake, an aging throwback to a by-gone era of detecting on the mean streets (a dinosaur that hasn’t got the memo that he is extinct who, yeah, sometimes thinks he’s Bogart, George Raft, and Lee Marvin rolled into one), has been dumped in the middle of it all. Not just dumped, but tossed on his head. The resulting injuries have, somehow, opened the door to the here-after. Dead people, Blake believes, are talking to him. Are the victim’s really begging the last gumshoe for help from the other side of the grave? Is he hallucinating? Or has he lost his friggin’ mind? When his nemesis, police Detective Lieutenant Wenders finds evidence that Blake is the murderer, the private dick’s life becomes a great big soup sandwich. Corpses Say the Darndest Things, a paranormal murder mystery (with a sly sense of humor) set in 1979 Chicago, where a maniacal killer on the loose in The Windy City… is the good news.