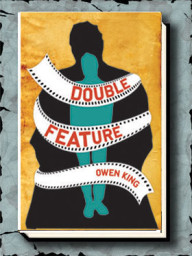 As a reviewer, I at least try to mention the central plot of a tale.  What’s the theme, the main point?    Problem is, with Double Feature that’s a little tough to nail down.  It’s easiest – albeit lazy – to simply tell you Double Feature is about life, period.  See the flaw in that?  Of course, life tends to be as unique as the individual and translates differently for each of us; much like this book is apt to do.  What I can tell you is that Owen King is clearly a master of metaphor with street level dialogue gleamed from years of eavesdropping on many a conversation. He paints what he captures with a seemingly photographic pen.  I can also tell you Double Feature presents a stark unraveling of Sam Dolan’s life, the people and places within it along with layers of personalities with all their choices, disappointments and victories in between.  The author portrays Sam’s life in a deliberate, slow burning manner which gives an organic air to the lives of its characters.  It’s tough not to become attached to them and feel what they feel, fear what they fear.

A grand offering at just over five hundred pages, the author has room to spare for the detours and back alleyways that snake through Sam’s life and those within it. Its momentum may be a gradual build, perhaps too gradual for some, but it’s so bloody well written that, I didn’t care how long it took to get wherever it was headed so long as I got to ride along in the passenger seat.

We begin to know Sam through his early years at University where he desperately tries to make a meaningful movie at all costs only to reap a most unexpected and life altering twist of fate.  As if it wasn’t exhausting enough for him to try and live up to his B-movie mega star dad, now he has his life’s biggest defeat to contend with as well.  It doesn’t take long to become absorbed in this visceral world in which much of the cast must live in the shadows of broken down dreams while rooted in their deepest regrets.  It’s a world which Owen King draws out as real as it gets as he expertly traverses between past and present throughout a generation of evolution.

Double Feature plays out as tragic as it is rife with comedic gold and represents the proverbial fly on the wall of a very sobering social landscape.   Owen King makes a helluva case for embracing the tragic, often heartbreaking beauty of our lives.  He proves that on more occasions than not, it’s our collection of all the small things that end up meaning the most in the end –  Because  after all, it’s who we are.

Now best go grab your copy before they’re all sold out as you’ll no doubt enjoy pondering over it as I did well after the credits stopped rolling.