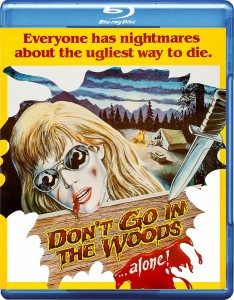 During the early 1980s hardly a weekend went by without the release of some new maniac with a knife movie. It was the heyday of the slasher film, and 1981’s Don’t go in the Woods was one of those flicks. And well, that’s about the best you can say about this movie. No, it’s not horrible, but it is a far ways from being good. Largely forgotten by all but the most diehard slasher fans, it has nonetheless garnered a very small cult around it. So now it’s out on Blu-ray/DVD from Vinegar Syndrome, a company that made its bones by releasing the cult flicks that time forgot. Is it worth a watch, let alone a get, if you’re not already part of this movie’s cult? Well grab your sleeping bag, a can of bug spray, and let’s ignore the title and go into those woods to find out.

As the title suggests, Don’t go in the Woods is a backwoods slasher. Taking place in a heavily visited forest, a wild man killer in furs, clad in junk and beads (for some reason) and wielding a long stick with a knife on one end, starts killing various campers, hikers, fishermen, and pretty much anyone that crosses his path. Who is this murderous mountain man? No one knows, and it is never revealed. Why did he suddenly start killing? No clue. How long has this been going on? You’re guess is as good as mine. Yeah, Don’t go in the Woods gives zero damns about backstory, or plot for that matter. The same can be said about character development. All you get is a bunch of random people bumped off one by one. Sure, a lot of slashers have been accused of doing that over the years, but never has that accusation been so dead on as it is here.

For the tried-and-true slasher fan, there are some good kills in here, but not many. As for the killer, he’s sadly not all the memorable or frightening. For the first half of the film, the killer is an unseen force, then for some reason about the halfway mark, he is show. From that moment on, all sense of mystery is lost and he’s just sort of a Hills Have Eyes reject but without any of the creep factor that made those villains scary.

That said, there is an element of dumb fun running through out this film that does make it quite watchable. Whether it’s the so bad it’s awesome acting of much of the cast, or the questionable choices people make in the film that leave you scratching your head, there is a lot funny to be found here. Then there is the intentional humor that more often than not hits the mark. True, there’s not much of that, but when it happens, it’s usually amusing in a weird, off kilter kind of way. So there is that.

On to the special features on this new Blu-ray/DVD combo from Vinegar Syndrome. First and foremost, there are three, count them: three audio commentaries. There’s the director’s commentary, a group commentary with the director again, actress Mary Gail Artz, and two self-proclaimed super fans of the movie. The third commentary is my favorite and that’s by a horror podcasting group called The Hysteria Continues. If you only listen to one commentary track while watching this flick, make it that one, but each and every commentary had something to offer. Want more than that? Well there is a cast and crew featurette that’s nearly an hour long where people who made the movie give interviews about their thoughts on the film, both past and present. A second featurette that’s 30 minutes long is on the original DVD release and the autograph signing that went along with it. There is an extensive collection of TV spots and talk show interviews for the movie from when it was theatrically released. Do you love photo galleries? Well if you do, rejoice, because there are two of them here, one for the production stills and one for the press artwork. The ever-present trail is also on here, but so too is the complete script. So for an early 80s slasher that is largely overlooked when people talk about that little slice of horror, Vinegar Syndrome has shown it a lot of love. There are modern blockbusters that don’t get this many extras when they come out to disc.

Don’t go in the Woods is far from a horror classic, but it is enjoyable in an almost Mystery Science Theater 3000 kind of way. At least, that’s how I always watch it, and by doing that, I enjoy it quite a lot. If that sounds like something you would be into, then pick up that very good Blu-ray/DVD combo pack for a fun, but only so-so slasher flick. It gets a recommendation from me, but one with a big caveat attached to it.