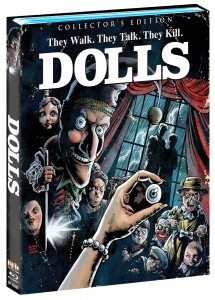 One of director Stuart Gordon’s more overlooked and forgotten films he did for Empire Pictures back in the 80s, Dolls has nevertheless always been a favorite of mine. No, I don’t have a real-life fear of dolls to bolster that opinion, nor do I think the simple story is anything special, or the film even all that well made, but it is a fun throwback fright flick from my formative years. So I freely admit, this review may be tinted a bit rose-colored, and I just can’t help but watch this movie through nostalgia glasses. I can’t tell you how many times I’ve seen this movie, and every time I do, it puts a smile on my face. So consider yourself amply warned of my admitted bias, and let’s get serious about playing with some Dolls.

The movie begins with a couple of really bad parents (one is even a for real wicked stepmother) and a little girl, traveling down a lonely, wooded road in the middle of the night during a thunderstone. Before you can say cliché, they car breaks down and they go to a spooky looking old house for help. There they meet the nice, but odd, old couple that owns the house, as well as two punk rocker chicks (one is the girl from the famous A-ha music video for “Take on Me”)and rather sweet-hearted, if somewhat dim-witted man, who were also caught in the storm. The old couple tantalize the little girl with stories of “the longest night of the year” and how toys are loyal to their owners, when they’re not playing by themselves when no one is looking. Oh, did I forget to tell you that the old, spooky house is chock full of dolls of all shapes and sizes? So yeah, you know exactly where this movie is going right from the start, but that’s not necessarily a bad thing.

In typical EC Comics fashion, all the bad people in the movie get their just deserts at the tiny hands of all the deadly dolls and murderous Muppets. If you suffer from pediophobia, or the fear of dolls, then there will be some real chills for you here. I remember watching this movie with a cousin of mine some years back who had a deathly fear of dollies, and she had to get up and leave three times during the movie. If dolls don’t really creep you out, you should still get a kick out of the flick as it is played for about equal parts laughs and scares. There are some memorable scenes here, such as a giant, killer teddy bear, a girl being used as a battering ram against the wall, a toy soldier firing squad, not to mention the great poster image made real of the doll holding her bloody eyes in her hands. Still, all that said, this isn’t a usual Stuart Gordon gorefest, so if you go into this movie, you might come out feeling disappointed. If you’re looking for something a bit more whimsical, then you’ll get a better kick out of it.

On to the special features on this new Blu-ray release from Scream Factory. There are two audio commentaries to be found here. One is with director Stuart Gordon and writer Ed Naha, and the other is with actors Carolyn Purdy-Gordan, Stephen Lee, Carrie Lorraine, and Ian Patrick Williams. There is a making of featurette called “Toys of Terror” that runs 38 minutes and has most of the behind the camera people on it, but only a few of the actors. A theatrical trailer, a film-to-storyboard comparison, and a still gallery closes the lid on this toy box of extras.

Dolls isn’t for everyone. The hardest of the hardcore gorehouds have always been disappointed by this fairytale-feeling film, as it is the odd man out when it comes to Stuart Gordon movies. Also, if you’re not already scared of dolls, there isn’t too much to frighten you here. But it is an enjoyable slice of cheesy 80s goodness, and if that sounds like your kind of thing, then why not play with these Dolls for a bit? I’m betting you’ll have a good time. Consider this one recommended.