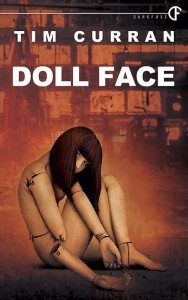 Doll Face is a fast, brutal hallucination of a horror novel. Tim Curran creates some visceral horror with this tale of a town possessed by an indescribable evil that can only be overcome by facing it down. The characters, a group of average young adults out looking for a good time, are thrust into a town of terror after their car breaks down. That typical premise leads directly into a unique set of challenges and terrors the characters will have to survive. The wild horrors include a giant monster composed completely of charred doll parts, a spider and its web large enough to ensnare a person and “evil clown puppets.”

Each character faces their own trials to overcome to survive the nightmare town, trials that are specific to their fears and pathologies. The reader learns more about the characters through the horrors they have to face down than through traditional exposition. It’s a fascinating storytelling device and is, for the most part, successful.

The story’s second act, where the characters overcome their presented challenges, is a bit long, mainly due to the fact that only the two main protagonists and the villain are fully realized as flesh and blood characters. The supporting cast is relatively average; the characters are more stereotypes than unique players in the story. The two main characters, though, are well-rendered and feel very real, and the horrors they face serve to make them more believable. The horrors work even with the lesser supporting characters, but more as chills and thrills than as character development. Interestingly, as the story is wrapping up, the author addresses the fact that most of the characters are two-dimensional within the context of the narrative, and it’s an interesting moment, one that makes the reader reevaluate the character’s role in the narrative as a whole.

The villain is great, she’s referred to as the Controller, the puppet master and Mother Crow at various times. She is an interesting iteration of the Wizard of Oz character archetype, a “pay no attention to the person behind the curtain” power player. By the end, the reader is truly invested in the remaining characters and the outcome of their final showdown with evil. After reading this novel I feel confident that few, if any readers, will be calling anyone by the pet-name “doll face” any time soon.