Doctor Who 50th Anniversary Special: The Day of the Doctor – Blu-ray review 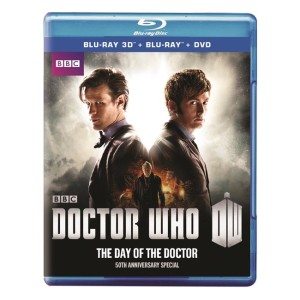 Doctor Who 50th Anniversary Special: The Day of the Doctor

First let me state for the record that I am not a Whovian. That is, I am not a fan of the long-running, British sci-fi show, Dr. Who. Don’t get me wrong, I don’t dislike it. Rather, I am more of a neutral viewer of it. If it is on, and I have nothing better to do, I’ll give it a watch. Sometimes I am pleasantly surprised by it and I like it a lot. Other times I am rather disappointed and think I wasted an hour of my time. Most of the episodes leave me thinking; huh, that was OK, but I don’t see what all the fuss is about. So now that you know where I am coming from on the whole Dr. Who phenomena, you might want to perk up your ears when I say that I really enjoyed this feature length special. So if you want some good, time-trippy sci-fi with some British flavor, keep on reading. If that’s not your thing, then go ahead and stop right now, because despite what the most rabid Whovians say, that’s pretty much all this show is. Is that good enough?

This time it was. I went into The Day of the Doctor all prepared to not get a bunch of references to old episodes, but thankfully there was only a minimum of that. Moreover, when nods and winks to days gone by were made, they were either well explained so that even a laymen like me could get them, or else they were so subtle to be only there for the truly diehard fans. That way they didn’t interrupt the story, nor were events hinged on them. That’s exactly how a special celebrating 50 YEARS! of backstory should do it.

As for that story, it was an enjoyable ride with good direction and some downright great acting. It had two incarnations of Dr. Who (the good Doctor dies every so often and then regenerations into someone new, thereby allowing many actors to play the same character over the show’s very long run) coming together to deal with a problem facing an all new past incarnation of himself. Yes, you read that right. Time travel be trippy. The current Doctor, played by Matt Smith, and the previous Doctor, played by David Tennant, are together for the first time, and so is a Doctor that all incarnations after him tried very hard to forget. That’s why he was never mentioned or seen before on the TV show. This is the Doctor during the time of a great intergalactic war between his home world and Dr. Who’s best known baddies, the robotic Daleks. This is The War Doctor.

This “War Doctor” is Dr. Who as he was during the great “time war.” This sorrowful individual is played by veteran actor John Hurt, who all but steals the show every time he’s on the screen. Hurt plays his version of the Doctor to moody, pissed off perfection, and he has a right to be a wee but upset. You see, he’s going to destroy his home world, and all of his own people, to stop the evil Daleks once and for all. Or should I say, he already did that (time travel again) and that decision has haunted him for the rest of his many lives. But with three Doctors together, combined with a unrelated threat that not only allows them to team up, but provides them with a much needed McGuffin, can three times the Doctor change his very own history to save the day?

Well that would be telling. So you’re just going have to watch this show for yourself. Thankfully, if you missed it when it was aired, the BBC had release a cool triple pack of the DVD, Blu-ray, and 3D Blu-ray. I didn’t watch in in 3D, sorry but I hate that fad, but it looked absolutely great on normal Blu-ray. It also comes with some nice extras like a featurette called “Dr. Who Explained” which was perfect for non-Whovians like me. There is also a behind the scenes feature and two mini-episodes that were, until now, only available on the web.

The Doctor Who 50th Anniversary Special: The Day of the Doctor was a very enjoyable watch, perfect for fans and non-fans alike. Even if you don’t know Dr. Who from Dr. No, you can still get a kick out of the adventure and humor found here. Therefore I can give this special a high recommendation to all sci-fi lovers out there.