Do You Believe in Ghosts? 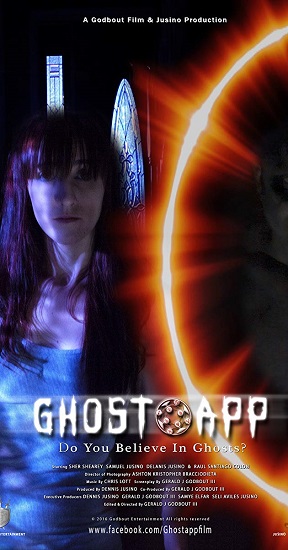 OCT – Orlando, FL – Do You Believe In Ghosts? Godbout Entertainment is proud to announce the release of their latest Award-Winning short film called Ghost App. After a successful festival run, the film is now available for rent on AMAZON PRIME.

It’s just like any other night for Sher as she sits down to watch the newest Netflix movie. However, on this night she receives a text from a stranger offering her a chance to download a new app. An app that will let her see what cannot be seen with the naked eye. The other side.

This short film is a concept film that was born out of the idea when the Pokemon Go app came out and everyone was walking around in the real world looking for Pokemons. Gerald Godbout thought what if an app would let you see and talk to ghosts and what if these ghosts can not only see and talk to you, but touch you as well. The concept pulls ideas from 13 Ghosts, Poltergeist, and Halloween 3, and injects a new twist that had audiences loving it and talking about it long after the festival was over. With so many shows about ghost hunting currently on tv and the internet, interest in life after death shows no sign of slowing down. During its festival run Ghost App won awards for Best Horror Short, Best Editing, Best Score, and Audience Choice Award.

Gerald Godbout is a self-taught filmmaker and tv producer working in the industry since 2000. His first film, a fanfilm called Legends – A Friday the 13th Tale, was released in 2004 before Youtube, and was a hit with over a million times. In 2006 he started working in televsion in and was nominated 3 times and won a Suncoast Emmy Award in 2008 for his post production downloads. In 2011 Gerald made another fan film called Legends 2 – A Halloween Tale after seeing a story about a Halloween fan who built a replica of the Michael Myers house in North Carolina. The fan film has almost 1.5 million views on Youtube.

Gerald has gone on to make or work on several award-winning short films and trailers, and has written several feature films including Ghost App, which is being shopped around, as well as a slasher film called The Surprise Party and a drama called The Promise.