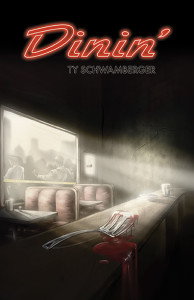 Writer-Producer David Stever (COFFIN) has acquired the rights to the horror novella, DININ’, from writer Ty Schwamberger. The project will be developed through Stever’s Cinder Path Productions and is slated to film next spring. Stever will write the screenplay adaptation.

DININ’ is the story of three college girls who stop at a greasy, roadside diner while on their way to Las Vegas for a weekend of debauchery. But, after skipping out on their bill, they must try to escape the diner’s owner who has more on his mind the recouping the cost of food.

DININ’ has been dubbed a classic horror story the late, great Richard Laymon would have loved. “I’m really excited about developing this story as a feature. Ty Schwamberger wrote a very original, imaginative, and scary story that will be a real challenge for our actors and production team,” said Stever. “It has all the elements of a great horror movie and one I know will become a fan favorite.”

“Ty Schwamberger never fails to serve up the shocks and DININ’ is no exception. In it he pits an array of well-drawn characters against an action-packed buffet of butchery, savageness, and graphic mishap. Readers beware, DININ’ is not the safest menu choice for the timid-hearted.” ~ Shroud Magazine

“Ty Schwamberger effectively conjures a fun Richard Laymon-esque atmosphere in DININ’. The terror starts early in this one and rarely lets up.” ~ Bryan Smith, author of The Killing Kind, Depraved and Highways To Hell

Ty Schwamberger is a growing force within the horror genre. He is the author of a novel, multiple novellas, collections, and editor on several anthologies. In addition, he’s had many short stories published online and in print. Prior to DININ’, he’s had two stories, CAKE BATTER (2010) and HOUSE CALL (2013) optioned for film. He is an active member of the Horror Writers Association.