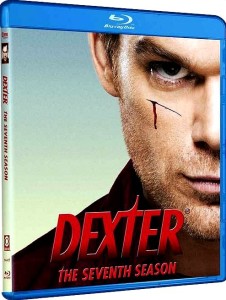 Dexter, TV’s favorite serial killer of serial killers is still doing his thing down in Miami. However he’s now been doing it for seven years. Over that run there have been some great seasons, a few mediocre seasons, and sadly a pretty bad season or two, with the previous Season 6 being one of the lowest points in my opinion. However, that season did end things with a great cliffhanger.

OK, SPOLIERS, I guess. But honestly, that was almost two years ago now, so if you still haven’t seen it, what are you waiting for?

Anyway, at the end of Season 6, Dexter’s long suffering sister, Deborah, finally caught him in the act of killing a killer. So this season had one hell of a great start, literally picking up right at that moment. I can’t remember when a show, any show, started off so strong, but was the rest of the season any good? Or did it all too soon jump back into meh territory as it sometimes does? Well there’s only one way to find out, so come with me and let’s get crazy with Dexter.

The central theme of Season 7 is Deborah coming to terms with the murder machine that is her older brother, and Dexter promising to behave and try not to kill. But you know that’s just not going to happen, right? Yeah, they’re not fooling anyone.  After all, if Dexter actually put the knives down for good that would make for a pretty boring show. Thankfully the show runners know the audience isn’t completely dumb, so they drop that bit about midway through. It then shifts to Dexter and Deborah trying to hide all of Dex’s past murders from the every curious cops they both work with.

As for the big bad this season, well there isn’t one. Unlike previous seasons of Dexter, our antihero won’t be squaring off with a central villain for most of the episodes, but instead will have to overcome a bunch of smaller challenges and opponents. I thought this was a nice departure from the usual formula, and while I wouldn’t want every season to work this way, a little change now and then can be a good thing. As for those challenges, first there is the “my sister knows I’m a killer, now what do I do?” problem that lasts all season long. Then there is Dexter’s feud with a douchebag computer programmer with a major case of nerd rage. Thankfully that is settled really quick as that guy was far more annoying than threatening. Then is perhaps the best thing about this season, Ray Stevenson as a Russian mobster out for revenge. I am a huge fan of Mr. Stevenson and I really enjoyed his sadly too short stint here. Finally there’s another “will Dexter find love?” storyline. What, is that the third or fourth time this show has done that? However, this time there was a nice twist with the woman Dexter falls for being a mass murderer just like him. One that’s willing to kill anyone that threatens her, including Dexter’s own dear sister.

Now all that might sound like too much for one 12 episode season, but it is surprisingly well handled. No plot gets shortchanged, and yet nothing overstays its welcome. If anything, I wish Steveson’s Russian mobster would have stuck around more, but even when he went out, it felt like the right time for it to happen. There is also a cool overarching plot that I won’t give away here, that ends with yet another great cliffhanger, setting up a new dilemma for Season 8 to deal with. So all in all, Dexter Season 7 was pretty darn good. It’s didn’t hit the heights of the first or fourth season, but it was a far sight better than it has been in a while.

That said, once again Showtime as utterly dropped the ball when it comes to releasing its flagship show on Blu-ray. While the show is good and it looks great in HD, there are no extras or special features on here at all. Not one. I really wish they would take a page from HBO’s book. When they released their hugely popular Game of Thrones to Blu-ray, they loaded that sucker up with extras and goodies and made it one hell of a collection. Here it seems that Showtime just can’t be bothered to do the same for its fans and that’s a pity.

Horrible lack of extras aside, Dexter is still a very good show, Season 7 was pretty darn good, and the new Blu-ray set is worth a buy if only to see the ongoing story of the killer with a code of honor. I know I can’t wait to see how the new season picks things up after the bomb dropped at the end of this one. So consider Dexter Season 7 recommended.