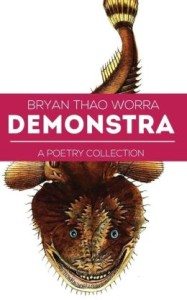 It took exactly seven lines for me to decide I was onto something special with this new release from Innsmouth Free Press. This book is just that good. In Demonstra, Bryan Thao Worra presents an unusual collection of speculative poetry, filled with references to popular horror tropes, traditional Laotian folklore, and Buddhist musings in striking and unexpected combinations. Within, the classic monsters from Universal Pictures and Creature Double Feature rub elbows with Laotian Phi, Rakshasas, and Nyak. The author was adopted as an infant during the Laotian Civil War, and grew up in America, returning to Laos and reuniting with his biological family some 30 years later. The mythology and folklore of both nations intertwine, reflecting the icons of an American youth and the rediscovery of the culture of his family of origin. Poems about Lovecraftian shoggoth and the hungry ghosts of Southeast Asia intermingle with poems about cultural and personal identity. The result is entrancing, delightful, sad, and philosophical.

Horror is consistent throughout, but it is different from much of the conventional gloomy and spooky verse that frequently appears in anthologies and magazines. At times, the work is sublimely ridiculous. A poet asks a monk, “Does a zombie have a Buddha nature?” Later, an aged shaman, speaking through a translator, asks the poet “Who’s your favorite wrestler?” and poses like Randy Savage. At other times, the horror is more serious, and there is a darker subtext that permeates the work. Worra speaks of a people haunted not just by monsters, but by war and diaspora. Popular culture is juxtaposed against references to refugee camps and battles from what was, to most of the world, a secret sidebar to the war in Vietnam. The poetry describes the echoes of an ancient culture ripped violently into modern times. Beyond these concerns are universal human stories of meaning and impermanence, set against the black void of space and rampaging kaiju. In a deft balancing act, Worra retains a sense of wonder and humor that complements the darkness. The collection communicates a broad range of emotions. It is a skillfully crafted collection, featuring a fresh and exciting voice.

To supplement the work, the author has provided appendices, including a Lao American Bestiary, describing the many spirits, powers and entities that populate the poems in great detail; a rich bibliography of Laotian culture and history; and translations of Cthulhu Mythos entities in Lao. It isn’t necessary to read them to appreciate the poetry, but they do enrich the volume and add layers of meaning. If you know the language and the culture, I imagine it would be a different experience, but wonderful nonetheless. The poetry is also complemented by illustrations by Vongduane Manivong.

Having read it once, I look forward to revisiting it again. The talent that earned Worra a Fellowship from the National Endowment for the Arts and various other awards is on full display here, and I cannot recommend it highly enough.  More on the poet and his work can be found at http://thaoworra.blogspot.com/