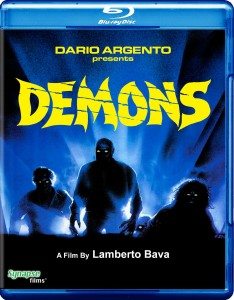 This is a two for one review of two movies that go together like peanut butter and jelly from the always excellent Synapse Films. They were first released as special, and pricey, limited edition steelbook editions, but now Synapse has brought them out as more wallet-friendly versions. How do they stack up to the previous special edition? Well grab your movie ticket, high-rise apartment key, don’t touch any strange metal masks, and let’s find out.

First off, both movies have Synapse Films’ usual great look, thanks to a beautiful new HD restoration and color correction from a 35mm negative. No one, but no one puts more time and effort into making their Blu-rays look amazing than Synapse does. If you want the best possible looking versions of these films ever made, then these will give that to you. 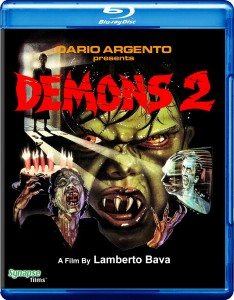 Okay, both movies looks good, but what about the goodies? You know, the extras? Sadly, that’s where these discs could use some work, as they are as barebones as discs get. I guess Synapse did that to keep their limited, special editions, well, special. So if you’re a fan of special features and extras, these might not be the Blu-rays you’re looking for. If you just want these great looking gore classics for a more modest price and don’t care about anything else, then you’ll want to snap up these beauties.

As for the stories behind each film, well they are admittedly thin, but you don’t watch these flicks for the plot of strong characters. No, you watch Demons and Demons 2 for the silly, splatstick and over the top gore gags. That’s where these movies shine. That, and some truly outrageous moments, like the motorcycle/samurai sword slaughter from the first movie. Speaking of the first film, it was produced and co-written by Italian horror maestro, Dario Argento, and directed by Lamberto Bava. In it, a group of people get free passes to a movie theater showing a film about people getting possessed and killed off by demons. Well, life imitates art, and soon the theater is overrun by demon-possessed psychos. Things then become a desperate fight for survival as the non-possessed try to escape the theater with their lives. And that’s pretty much it, but while that plot is pretty simple, there is a reason this movie has a large and loyal cult following. It is fun (if you love crazy amounts of violence and gore) from start to finish, and honestly that’s the best way to describe it. It’s nothing serious or deep, but it’s a hell of a good time.

Demons 2 is pretty much more of the same. Argento and Bava replay their roles from the first movie, and the story doesn’t change all that much, either. It is more people getting possessed, turning into gnarly, fanged, and sometimes horned demons, and then killing people in very bloody, often outrageous ways. Only this time the action takes place in a high-rise apartment building. If you liked Demons, you’ll get a kick out of Demons 2, even if it is the slightly weaker movie of the pair.

So there you have it, two Italian gore classics, now on Blu-ray in two forms from the cinephiles over at Synapse Films. If you are a huge fan of these flicks and want all the bells and whistles, then get the limited steelbook version. If you love these movies but are on more of a budget, now you can get these no-thrills but still great looking Blu-rays. Either way, you can’t go wrong with Demons & Demons 2 on Blu-ray in my book.