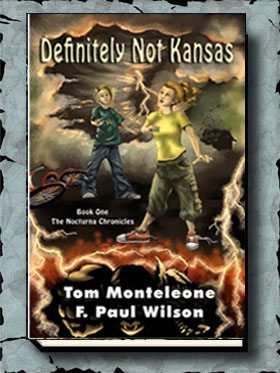 Fright masters Tom Monteleone and F. Paul Wilson unite to create an alternative world filled with trolls, werewolves, zombies and countless other monster races that co-exist in a nightmare world known as Nocturnia..  Definitely Not Kansas is certain to educate and warp young minds into fearing the scary unknown and embracing it wholeheartedly.

The story opens with main stars of Definitely Not Kansas, Ryan and Emma, who are concerned that their eccentric older brother Telly hasn’t been seen or heard from for longer than usual. Tracing their weird brother’s steps back to an even weirder Professor Polonius, the retired geezer who had taken Telly under his wing, the kids end up at the professor’s strange and sophisticated garage based lab. After gathering a few more clues that only add to the mystery of their brother, the kids set out on their bicycles armed with determination and a borrowed GPS which the professor had preset to where Telly was expected to somehow show up.  Instead they’re soon caught up in the path of an F5 Tornado that devours their family home and is headed straight for them. Moments before Ryan and Emma are sucked up into the raging vortex, a hole rips through the air and an unseen force pulls them into a place even there most vivid, terrifying dreams could not have prepared them for.

The world of Nocturnia is one of the most far fetched and darkly fantastic worlds I’ve had the pleasure of exploring since Jim Henson’s Dark Crystal.  Authors Tom and Paul designed a world that resembles Earth in many ways, even replicating our blue planet when compared to our world maps.  Like Earth, Nocturnia plays host to a wide range of races, cultures and politics.  And that’s pretty much where the similarities end. On this stranger new planet, humans are regarded as little more than food and cheap slave labor. Nocturnia clearly belongs to our darkest fantasies and all the monsters that dwell within.  Even the vegetation could kill you if you aren’t careful.  With a better chance of landing on the dinner plate of some hungry fiend  than escaping this awful place, Ryan and Emma have little  chance of survival except for their own wits, determination and a little bit of  help from the inside.

With nary a break in this fast paced, easy to read adventure, I found myself happily waxing nostalgia on the books I used to read as a kid and the reasons I fell in love with monsters to begin with.  Whether you’re a young, old, or somewhere in between reader, this YA effort from two of the best in their class is a welcome adventure well worth reserving.  Besides, sleep is over rated; read this instead.